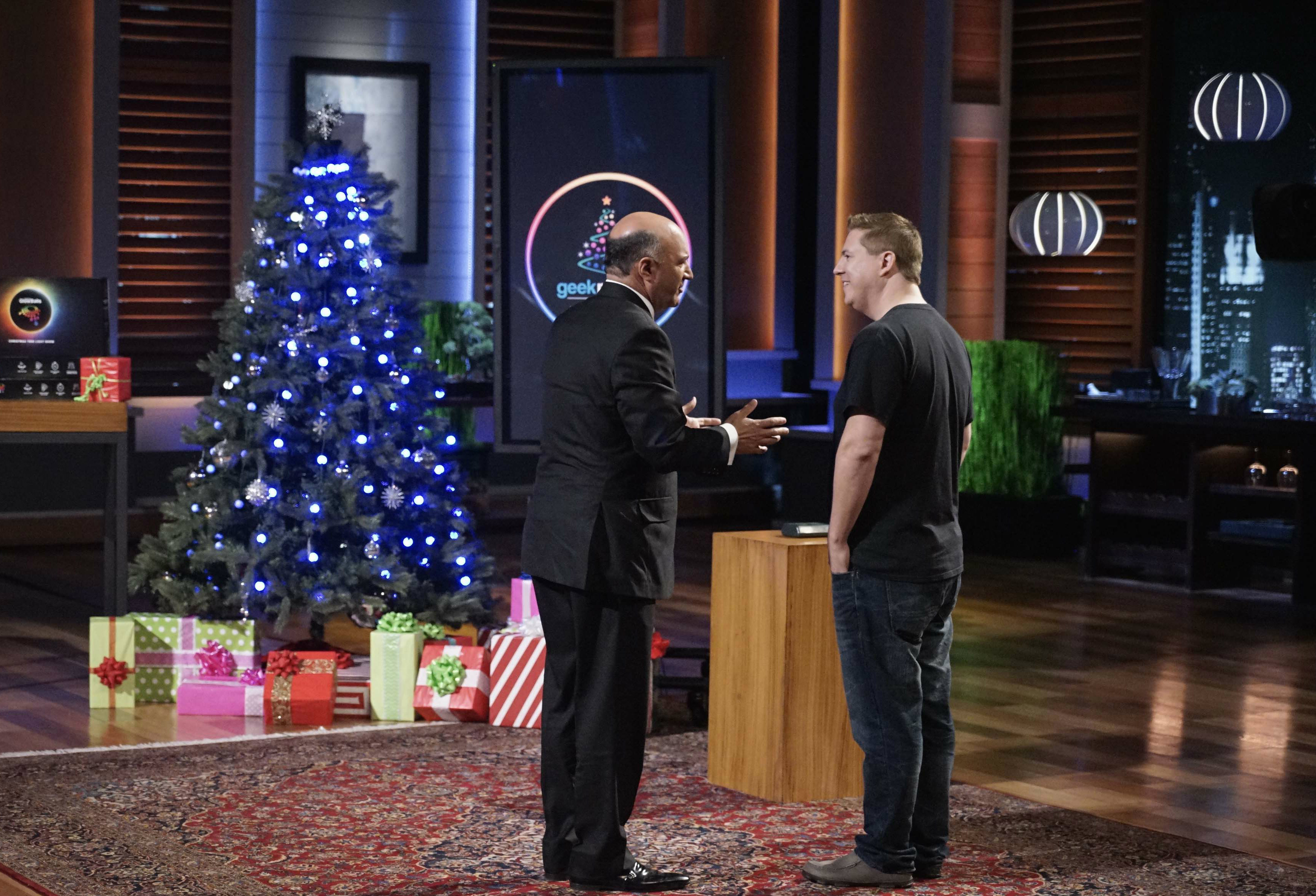 Brad Boyink founded GeekMyTree after a couple of years of having the coolest house on the block come Christmas time. It all started in 2006, with a synchronized light show outside his painstakingly decorated home. It got increasingly popular and soon attracted over 70,000 people a year. Brad used the draw for good – he made his light show a fundraiser for multiple charities such as the Special Olympics.

In 2013, he moved from the area where he was famous, and took the show inside, He decorated his own tree with professional lights, and posted a video on Youtube. He got such a positive response that he decided to try and make Christmas Tree decorations that would let anyone create an awesome show. He built a prototype and started to show it off. It combined the Christmas tree lights with an app that lets you control the show. In 2014, he was approached by Shark Tank producers at a Christmas Expo in Mississippi. The timing was not right, and he turned them down, only to get re-approached later on. He accepted, so let’s see what happens. 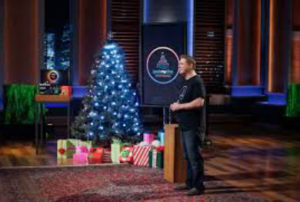 Brad Boyink came out wearing a GeekMyTree t-shirt, and introduced himself. He said that he wanted $225,000 for 25% equity in his company. He stated that he wanted to modernize Christmas Tree lighting from the pile of tangled lights in the box that people fight through every year. He invented “Animated Glow Balls.” Brad said that it brings the fun of an outdoor light show to the indoor Christmas Tree. As he is talking, the Christmas tree on stage leaped to life, going from a static white to changing hues of greens and reds and blues. They flashed, and then started going through the patterns. The Sharks scribbled busily, and Mark smiled upon Brad, not writing anything down.

Brad went through a couple of different models, including the Sparkling Green, “like money, for Mr. Wonderful.” Brad said the next step would be to add full musical sequences. The Dance of the Nutcracker started playing, and the glow lights pulsed and changed colors along with the music. I think I saw Kevin give a genuine smile. Brad said the lights are professionally synchronized. The do not just blink randomly to the music. Robert looked impressed as Brad asked who was ready to help him light up the holidays in a whole new way.

Mark jumped in, asking how much each set of animated glow balls costs. Brad told them that it was $299, and then $399 for the ones that synchronized with music. The Sharks looked shocked, and a little worried. Barbara had her mouth hanging open for a solid 10 seconds. Brad then handed out the components to the Sharks. Brad said the price included the lights, 16 built in light patterns, the controller, and the mobile app which allows you to purchase additional designs. Kevin looked concerned. He stated that a person could buy an LED screen at a retail shop for much cheaper than Brad was charging for his product.

Kevin declared that you have to be rich to have one, and Mark joked that it was a shame that he would never be able to afford one. Kevin stated that he was stunned by the price, and Robert asked him why. Barbara pointed to the tree and asked if they were looking at the full set. Brad said that it was the start kit, and an expansion, which cost another $200. Kevin exclaimed that he could put a payment on a house for that, and asked Brad if he saw an issue with a family paying over $500 for tree lights. Mark interjected that it was not for every family. Kevin said that families that bought in wouldn’t see Santa because they would be in debtors prison, and called it ridiculous.

Brad stated that it was expensive because he was only able to do a limited run of 2,000 units this season. Kevin asked how much the price would drop if they increased production. Brad said that they could reduce the price by 20% if he rose to 10,000 units. Barbara and Robert insisted that that was still too high. Brad said he could bring it down 30% if he increased production to 50,000 units. Robert asked how many he has sold, and Brad answered 300. Barbara wondered how he came up with the idea. Brad explained that he was one of the people who do the “mega Christmas Shows” for the whole neighborhood. He even did a show that consisted of 14 houses synced together that was the 2nd largest show in the country. Robert was impressed.

Kevin called Brad Santa Claus. Barbara then cut him down a little. She said that he was selling a $500 string of Christmas lights. According to her, the only person who would make the investment would be residents in a 20 bedroom mansion. She said that she was very out. Robert liked the idea but stated that he did not see how he was going to get a long-term market. Robert also went out. Immediately afterward Mark went out. He stated that he does not see it being a large business either. He was kind enough to say Merry Christmas though.

Lori was next up, saying that people like to go all out on Christmas, saying that they would spend money on decorations. She stated that she liked the idea if it was a cheaper thing, under $50 as a novelty. She said that it does not seem like something that would be for the indoor market. She was the next to go out. Brad looked upset, but he said he knew walking in that the price would be an issue. Kevin said that the price is exactly what is killing it for him. He is intrigued by the product, and he wants it, but the price is a sticking point. Kevin offered $225,000 for 50%, as a full business partner. Mark groaned but did not take the bait when Kevin goaded him by saying he could give a better offer.

Kevin stated that he loves it, and wants to purchase the product regardless to make his wife happy. Brad tried to negotiate for 40%, but Kevin refused. He intends to be a 50/50 partner and was unwilling to budge. Brad was silent as he thought it over. Kevin said that he cared deeply about the product, but he wants to make money.Brad was still having a hard time deciding, but he agreed. Kevin went up to shake his hand, and Brad thanked him for believing in him.

GeekMyTree Now in 2018 – The After Shark Tank Update 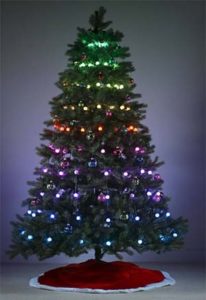 GeekMyTree just keeps getting bigger. The team brought on Matt Phillips, who won the 2015 Great Christmas Light Fights on ABC. They have Geek Lights 2.0 coming out this Christmas season. No tree? You’ll be able to purchase “Geek My Window,” described as “a complete light show for Windows that has effects for several holidays and events.” Not in America? No problem! GeekMyTree is expanding into the international market this year. You’ll be to purchase Geek my tree from their website , as well as their Amazon store. You can find updates across their social media as to what they’re up to. There is a little bit of radio silence now, but I’m sure the updates are seasonal.