In 2011, Melissa Butler and her creative director Rosco Spears set out to make a lipstick that stood out from the others that were currently being sold in stores. Melissa especially wanted more color options than your typical reds and pinks. She was tired of working for corporations and sick of big name makeup. She was a bit of a health nut, opting for organic foods and natural cosmetics. When she was just 22, she combined both of her passions, and start The Lip Bar company in her kitchen, with the help of her friend, Rosco Spears. Melissa immersed herself in research, learning about the industry and how to make, label, and market her products. She attempted an unsuccessful Indiegogo campaign to raise money to launch her business, and to purchase a Lip Bar truck. The campaign only raised about half of the $27,000 they were requesting. Now let’s see how they do with their next money raising project. 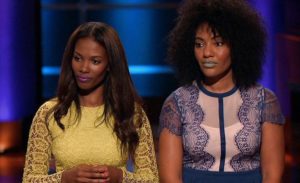 Melissa Bulter and Rosco Spears walked confidently out on the stage, each wearing one of Lip Bars bold lipsticks. The Sharks looked skeptical as they introduced themselves, and told everyone that they were from Brooklyn NY. They asked for $125,000 for a 20% stake in their brand. Melissa said that the Lip Bar was founded because she was frustrated with her lack of creative choice in lip colors, being restricted to just pinks, reds, and nude colors. She also expressed disgust at only having cosmetic options that are filled with chemicals. Melissa said it was at that point that she decided to found a cosmetics company that was socially responsible, healthy, and lets women express themselves with the natural colors, as well as those outside the regular lipstick color range.

Melissa then launched into the healthy ingredients list. She claimed her products were vegan and parable-free. They are made with organic moisturizers such as avocado oil and Shea butter. She asked the Sharks who was going to “pucker up and invest in the lip bar?” The pair then blew kisses at the Sharks.

Lori, the only female Shark on that day, immediately asked for samples. Instead of handing them out, Melissa and Rosco had Lori come up to them to “swipe some on her hand.” In the meantime, Mark asked if they were just a lipstick line, not a “bar” or salon where people would go to get their makeup done. Rosco explained that the Lip Bar was a thematic choice. The lipsticks are all named after cocktails. During this time, Melissa was handing out samples to the male Sharks. Lori, still up on the stage, took the same shade of green that Rosco was wearing, and put it on her hand. She declared that it was very smooth and creamy, and took it back to her seat. The other Sharks were fiddling with the samples they had been given. Robert jokingly asked the entrepreneurs to put the blue lipstick on Lori.

After looking at his sample, Kevin started in with his concerns. He said that the beauty industry is a multi-billion dollar industry, and is tough to break into since there are already large, famous companies saturating it. As Kevin points out, “If they thought they could sell more lipstick with blue, and green, and whatever other colors you dreamt up, don’t you think they’d do that?!” The women looked a little shell-shocked for a moment, then completely changed the subject, telling the Sharks that the thing that made them stand out is their messaging. Robert asked them what exactly their messaging is. Melissa then went on a tangent of explaining how their brand is about women’s empowerment, and how women don’t have to live up to a cookie cutter standard. The Sharks did not look impressed.

Lori cut in, asking where exactly that message was being conveyed. The other Sharks joined in, critiquing their logo, which is lipstick on a cocktail glass. Bright red lipstick at that, not the funky colors that they said to make their company different. Rosco stated that they share the empowerment of women through their extensive color range, but the Sharks did not appear to be buying it. Robert then asked if they were making any money. They said that they’d made $107,000 in the two years since their inception, all on their website. When asked how much they’ve made in the last month, Melissa declared that they’d sold $8,000 worth of lipstick. Daymond asked them where they were producing the lipsticks, and looked shocked when they told him. Melissa makes them at home, by hand for a cost of $3.00 per lipstick. They then charge $20 per lipstick, for an excellent margin of $17 per unit. This seemed to impress the Sharks, and Lori expressed her admiration for Melissa, and her ability to make professional looking lipstick in her home. That appears to be the only praise that the duo could expect this episode.

Melissa took that time to show the Sharks the web app that lets customers design their own custom colors based off of 10 different shades. The custom lipsticks cost a prohibitive $32, which is currently my electric bill. Apparently, these high-end lipsticks were not made for me.

Kevin said that this was a great innovation – for a market share of the clown market.The audience laughed, and Lori chided him for being mean. She said that they liked the idea of the web app, but insisted that it’s too hard to figure out what the color really is online since there are a number of different factors that could distort it. She described the prospect of purchasing lipsticks online as a guessing game. Robert addressed Rosco, Lip Bar’s creative consultant, saying that he was getting a mixed message from the branding. He would not want his daughter to go for a brand that has such a sexy logo – it sends the wrong message for empowerment. He went out, saying that he was not buying into the brand.

The pair looked upset but continued on. They highlighted their main issue as distribution. They stated that they were getting bites at trade shows from retailers, but the beauty buyers were not getting back to them. They said that they were starting working on a “Lip Bar Mobile” to fix this distribution issue. The Sharks all looked horrified. Robert asked them if they build it already, and they said it was currently being constructed. Robert did not mince words “Oh, that is such a bad idea.” Kevin stepped up in insults, asking if they walked into a bar with the green lipstick if she was worried that someone would try and resuscitate her. Rosco insisted that people come up to her when she is where unusual lip colors, and ask her where she got it. Kevin insisted that it was dangerous business and that if it were a good idea, the bigger names would be all over it. He ended by saying that larger brands would crush them like the “colorful cockroaches you are.” Naturally, he bowed out.

The pair entreated Daymond, saying that he was what they needed to get started. He was the next to go out, saying that you can’t create anything new in the beauty industry. Mark Cuban was up next, saying that wherever you go, people are looking for the basics in lip color. Even the Lip Bar logo features red lips. He also criticized their mixed branding, saying that the cocktail theme doesn’t mix with the empowerment and confidence message. He went out. The two looked hopefully towards Lori. She quickly crushed their hopes, saying that there were good margins, but heavy competition. And then there were none. In their exit interview, the two persisted, saying that “they would be a major brand, and the Sharks would be proud of them.” 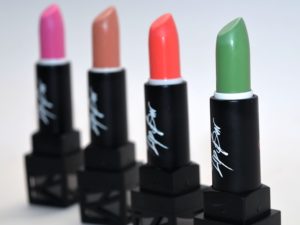 The creators of Lip Bar did not get the deal that they are searching for. In fact, they were openly mocked by the Sharks instead of receiving the help that they were seeking. So how are they doing now? According to an article on the Inquisitr in 2015, better than ever. Their products have been featured in popular women’s magazines such as Ebony and Cosmopolitan. You can purchase your favorite bold, vegan lipstick on the Lip Bar website. Melissa told Ebony magazine that they were planning a tour with their Lip Bar mobile in the NorthEast.