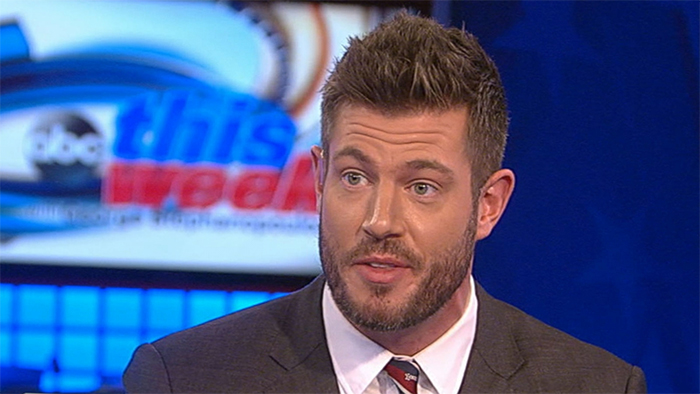 Jesse Palmer is a former Canadian football player best known for having appeared on the fifth season of the dating reality series, The Bachelor. The ex-athelete starred in the show at the age of 26, in 2004ーit would also be Palmer’s first and last involvement in a reality show. As suggested by its name, the series consists of a single bachelor who is then introduced to a group of potential female interests on the show; the bachelor eliminates a contestant every week as the series progresses until a “winner” is selected at the endーwhom he would be expected to propose to during the season’s finale. After months of narrowing down the number of possible candidates, Palmer ultimately chose law student, Jessica Bowlin as the winner at the end of the show’s fifth season.

While the two eventually found themselves in a relationship by the end of the series, the former quarterback  ultimately did not choose to propose to Bowlin; instead, he had invited her to “chase [their] dreams” together in New York. However despite the relationship’s promising outlook at the time, the blonde beauty eventually chose not to relocate with Palmer to the bustling state after some considerationーit wasn’t long before, the pair soon found themselves in failing long distance relationship. After having tried multiple times to “fix” the relationship, the couple eventually announced their break up in June 2004.

Besides being known for his time on the reality series, Palmer is also known for having been a professional NFL football player. After having played as a quarterback in his college football team, Palmer was eventually recruited into the NFL’s New York Giants team as a professional player; he later quit the American team to join a Canadian Football League (CFL) team called the Montreal Alouettes in 2004. Following close to three years of playing for the Canadian team, Palmer announced his retirement from the CFL in order to pursue a career in broadcasting. The former athlete is currently an analyst for college football for ABC in the US and TSN in Canada. 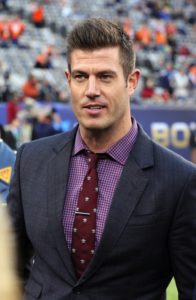 Born on October 5, 1978 in Toronto, Ontario, Jesse James Palmer is the son of Susan Palmer, a fashion model and Bill Palmer, a football player of the Ottawa Rough Riders. Growing up around sports, Palmer had always been interested in becoming an athlete. As a teen, he went to St. Plus X high School in Ottawa and had been an active member of the school’s amateur football teamsーincluding those that were part of the Ontario Minor Football Association. After graduating from high school, Palmer went to the University of Florida under a sports scholarship, where he studied Liberal Arts and Science. During his time there as an avid foot ball player, Palmer played for the university’s Florida Gators Football team from ’97 until 2000; he was known to have often alternated with fellow quarterbacks Doug Johnson and Rex Grossman at the time.

Recognized for his athletic talents during his senior year, Palmer was ultimately chosen to be team captain and was later given the Fergie Ferguson Award in 2000ーan annual award given to a senior member of the team for outstanding “leadership, character and courage”. Palmer later graduated from the university at the age of 23 with a Bachelor of Arts degree in Political Sciences and a Bachelor of Science degree in Marketing; throughout his college football career, the quarterback had accumulated a stunning total of 3755 passing yards.

Jesse Palmer on the Dating Reality Series, The Bachelor 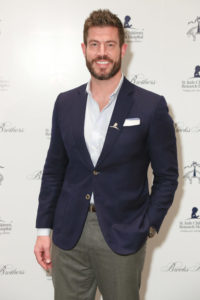 After auditioning for the reality series, Palmer was cast as The Bachelor’s first Canadian bachelor during the show’s fifth season in 2004. Almost immediately, he became known by viewers of the series for his charming appearance and attitudeーand the fact that he appeared to have preferred appearing on the show, shirtless. The fifth season of the reality dating series premiered on the ABC Network in April 2004 and it wasn’t long before Palmer had his fair share of fans rooting for him in front of the screen. Palmer starred on the show from April to May of 2004 for a total of eight episodes.

Created by Mike Fleiss, The Bachelor is an American dating game series that first premiered on television in 2002. The show’s premise revolves around a single bachelor, who is then introduced to a large group of potential female love interests whom he eventually gets to know better throughout the season. Every week on the show, the bachelor eliminates one candidate from the pool via the series’ elimination processーone in which he offers roses to those who he would like to stay on the show, and the opposite for those whom he feels that he shares no chemistry with. Throughout the series, the group also travels to a variety of different destinations and participates in various events such as one-on-one and group dates; although the first couple of weeks typically take place at a six bedroom mansion called the “Villa De La Vina”. 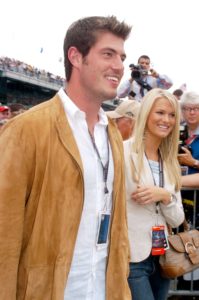 After a few weeks of getting to know each other, a relationship eventually bloomed on-screen between Palmer and fellow contestant, Jessica Bowlinーwho was a law student at the time; Bowlin was eventually selected as the winner of the fifth season of The Bachelor in May 2004, with Tara Huckeby as the runner-up. Contrary to the show’s tradition of having the bachelor propose to the winner at the end of the season, Palmer ultimately chose not to, offering Bowlin the choice of relocating to New York together in order to “chase [their] dreams” instead.

In the end despite the enticing invitation, the blonde decided against relocating to the bustling state and the pair soon found themselves in a long distance relationship; however unfortunately, problems in the relationship soon began to surface. After a few weeks of being together, Palmer and Bowlin eventually broke up on mutual terms in June 2004, citing that “[their] next steps will be taking them in different directions”. In a later interview, Palmer revealed that while they have had a wonderful journey on The Bachelor together,  the distance and lack of time/communication between them have effectively worked against their relationship. Having said that, the couple ended their relationship on friendly terms and have said nothing but good things about each other since the break up. After the two went their separate ways, Palmer went on to pursue a professional football career while the blonde has gone back to finish Law school. 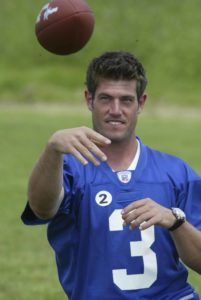 Even prior to his time on The Bachelor, Palmer had been a professional football quarterback of the New York Giants, having played for the team for a total of four seasons from 2001 till 2004. As a player on the NFL team, Palmer spent the majority of his time on the field as a backup quarterback behind Kerry Collins. After years of playing for the New York Giants as a backup, Palmer was eventually cut from the team in September 2005ーat the time, he was the second Canadian to have began at the quarterback position in an NFL team.

Wanting to stay in the sport after his departure from the NFL, Palmer focused his attention on the Canadian Football League for opportunities. In 2006, the athlete signed to play for the Montreal Alouettesーa professional Canadian football team originating from Quebec; he eventually went on to play for the team as a quarterback for half a season. Shortly after his time in the CFL, Palmer once again returned to play for the NFL under the American team, San Francisco 49ers, as two of their quarterbacks Ken Dorsey and Alex Smith had suffered unexpected injuries at the time. Following their recovery, Palmer was quickly released from the team without once ever having played a down.

During the 2006 off season, Palmer returned to sign under the San Francisco 49ers however was later cut a few months later in August of that year. The quarterback soon signed with his original CFL team, the Montreal Alouettes under their developmental roster. After over five years of playing professional football, Palmer eventually retired from the sport in 2007 in order to pursue a career in broadcasting. 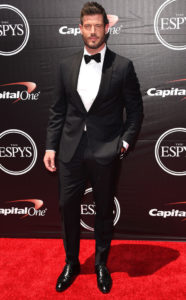 Since retiring from his professional football career, Palmer has turned towards working for the Fox Network as a sports television analyst for the NFL games. The former quarterback is currently an analyst for college football for ESPN and often shares his appearances on College Football Live with Canadian sport journalist, John Saunders. In addition to being a studio analyst for the college games, he is also involved with the live game presentation, ESPN College Football Thursday Primetime as a game analyst. Palmer also acted as a co-host on ESPNU’s The Palmer and Pollack Show alongside former professional linebacker, David Pollack, for a brief period during 2012.

In 2011, the broadcaster also appeared in a Canadian food competition series called, Recipe to Riches as a host. Shown on Food Network Canada, the reality series gathered various home cooks from around Canada for a competition in which the winner would have their recipe made into a President’s Choice item. The series premiered in October 2011, with Palmer as the host; the former professional football player continued to host Recipe to Riches until its second season in 2012. The reality series has since been picked up by CBC in 2013 for a third season.

More recently these last couple of years, Palmer has made a number of guest appearances (usually as an ESPN Football analyst) in a variety of talk shows including the American food themed talk shows The Chew and Rachael Rae. In May 2015, the broadcaster also had the opportunity to join the team Good Morning America as a Special Contributorーa role which he has been continuing since. In addition to having been present for multiple talk shows, he has also appeared in a handful of football games as a color commentator including at the 2015 Advocare V100 Texas Bowl and at the 2016 Rose Bowl in Pasadena, California.

In terms of personal life, Palmer has always been one to keep it away from the public light. However having said that, when asked about his recent love life, Palmer has stated that he is pretty much married to his broadcasting careerーleaving little to no time for serious relationships. To be fair, the former quarterback hasn’t been spotted with a women in the public for a while so for all we know, the fact that he is still single is probably true.

If you would like to stay connected with the former “bachelor”, then you can do so by following him over on social media. You can find the man on Twitter (JessePalmerABC) or on Instagram (@jessepalmerabc)!