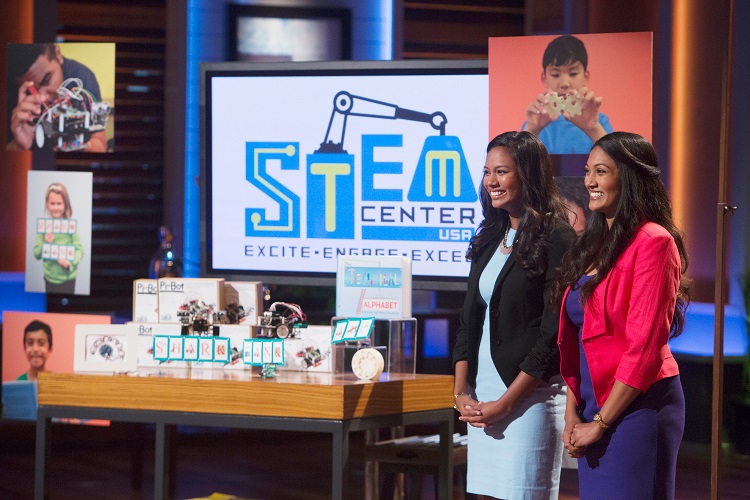 They say that knowledge is power, so just imagine how powerful STEM Center USA could be, because the co-founders of the company, sisters Lavanya and Melissa Jawaharlal were extremely knowledgeable indeed, and their business was centered around spreading knowledge to the next generation of engineers and scientists.

Melissa received a Bachelor’s degree in Mechanical engineering at the University of Southern California and went on to work at the Information Sciences Institute, where she was the lead designer for two satellites that are now in orbit. She had also worked for the United States Air Force in software optimization, and had presented her work at MIT and through Inventor’s Digest.

Younger sister Lavanya had enrolled at the University of California, Berkeley in the Mechanical engineering program and shared her sisters love of robotics, science and engineering, but they both wanted to encourage a love of technical subjects in the younger generation, and to that end they launched the STEM Center USA.

STEM is an acronym for Science, Technology, Engineering and Math, all subjects that are considered to be the core subjects that the next generation will need greater competency in, due to the technologically dependent age that they will live in. The Jawaharlal sisters opened a creativity center in Claremont, California, and offered extra-curricular summer camps to students, from kindergarten age kids to college age students, who showed promise in technical subjects.

The company invented a programmable robot, that could be assembled for just $75, and after a highly successful Kickstarter campaign, in 2014, they launched the self-assembly product on the company website, and added another lucrative revenue stream to the businesses income, but they wanted to bring the benefit of STEM center USA to children across the country, rather than just those lucky enough to live near their sole location.

In order to fund an expensive franchise set-up process, the sisters required a hefty injection of cash. They took their educational business to the Shark Tank, in October 2015, to gain an influential shark partner, and the funds to begin their mission to improve technical learning opportunities nationwide.

Melissa and Lavanya came to the tank seeking a $150,000 investment, in return for a 15% stake in the STEM Center USA business, and they had no idea of the friction their appearance would cause between two of the sharks.

They introduced themselves as ‘Sisters and co-founders of the business’, but the sharks could soon see that they were sisters anyway. They not only had similar speech patterns, but they had almost perfectly synchronized speech, sometimes finishing each others sentences, and sometimes effortlessly taking over the pitch from each other, it was a strangely hypnotic effect.

They explained, between them, that the STEM subjects were vital to the next generation, as modern life had become so dependent on technology. Yet with the advance of human knowledge, more and more children were being left behind in those core subjects. As they were both so passionate about technology and science, they wanted to inspire the same thirst for knowledge in the next generation, and of course they were clever enough to devise a way that would make them, and a shark investor a lot of money along the way.

They told the Sharks about their STEM creativity center, based in California, that provided extra-curricular teaching in technical subjects, as well as summer camps for intensive project work. They revealed that they wanted to franchise the business, and open other STEM facilities across the country, so that all American students had a chance to gain from the opportunity.

It was a good pitch, and the unusual shared nature of the pitch brought a smile to the faces of the sharks. Robert Herjavec asked what background they each had, Lavanya revealed she was aged just 21, and still studying for her mechanical engineering degree, Melissa revealed her history of designing satellites and working for defense contractors.

‘That’s pretty impressive’ remarked Lori, and it was. Robert asked for a few more details about the STEM creativity center, and Melissa explained that they currently had 85 students enrolled, each of whom paid an average of $135 dollars a month to attend. When questioned about annual fees, Melissa revealed that they were usually between $1,400 to $1,800 a year. ‘Fourteen hundred dollars!’ exclaimed Mark Cuban in disbelief, clearly surprised at the large potential income.

Kevin O’Leary inquired what profits the business had achieved so far. Lavanya told him that the company had made $300,000 in the previous year, from two separate income streams. $130,000 had come from the creativity center, but the sisters had also used their expertise to identify gaps in the market for robotic tools. They had created a robotic product for use in middle and high schools, it was called ‘PiBot’ and had earned the business another $170,000 in profit.

Kevin O’Leary was impressed with Melissa and Lavanya, as were all the sharks, and he could see lots of opportunity for the STEM Center USA company in the future, but he believed the sisters still lacked direction and focus in their business strategy. He opined that they were not quite ready for an investor, and he was sure that he didn’t want to partner with them himself, and with that Kevin was out.

Chris Sacca was the new shark in the tank, but he was more than prepared to denigrate Kevin after that speech. Chris told the sisters to ‘Ignore that soulless capitalist’, and he launched into a speech about his own two daughters, and his belief that not enough young people were entering technical professions now. He asserted that he shared the vision of the STEM business and was positive about the mission behind the company.

Robert however, was not as positive. He told the pair that the business would require a lot of work to scale up, and it would be a difficult process. He liked the concept of the business, but he wasn’t that keen on the business itself, and Robert dropped out too.

Mark Cuban had been quiet throughout the segment, and he admitted now that even though Melissa and Lavanya had a ‘Magnificent goal’, the market they operated in was not a suitable fit for him, and due to that he was also dropping out.

Chris admitted that he found the valuation challenging. He asserted that he believed deeply in the STEM company goals, and he had an offer to make. He proposed the requested $150,000 investment, but in exchange for 25% of the business. Lavanya told him diplomatically that they respected the offer, and ‘Would love to consider it’, which raised a laugh from the other sharks. Melissa asserted that they believed the valuation was fair. Robert suggested they make a counter offer, but Chris continued probing. He asked Melissa at what point he could expect to make a return in his investment, and told her that as a venture capitalist, he needed a ‘Terminal Point’ where he could be sure of selling his share of the business, at a considerable profit.

Lori announced she had something to share, but Chris quickly interrupted her. He told the entrepreneurial sisters that he respected Lori, however he had a ‘Unique skill set’ to bring to the business. Lori repeated that she had something to share, but Chris suddenly began to mock his fellow shark, asking her sarcastically if she had a homespun tale to share about STEM. The Shark Tank can be a little rough occasionally, but Chris was coming across as far too pushy, particularly to the refined and intelligent Jawaharlal sisters.

Lori announced her wish to share something a third time, and finally Chris allowed her to speak uninterrupted. She told the sisters that as a woman, she admired the strong role-model they set for young girls in education, she found them both ‘Impressive’, and she liked the concept of the business too. She asserted that the three of them would be successful together and offered $150,000 in exchange for a 20% stake.

Chris continued to ramp up the tension. He asked Melissa what she wanted from a shark. She spoke briefly about the need for funding to start the franchise scheme, but was soon interrupted. Chris said ‘I didn’t hear you say I need QVC’, in another attack on Lori, but his fellow shark refused to get involved in a fight, and laughed that Chris knew she did a lot more than just QVC.

Melissa told both sharks that she, and Lavanya, would love to work with them both. Lori clearly had no hard feelings about Chris’s strategy in the tank, and confirmed she would be willing to share a deal with him, but Chris was still on the attack. He told Lori that she was ‘Swimming in his wake’ and a shared deal with STEM would be ‘Free Money’ for her. Implying that he would be doing all the work, yet sharing the profits with Lori.

Lori still refused to be provoked by her fellow shark, and instead laughed off his comments again. She told the sisters that she would be with them 100%, and provide all the support they needed. That was all the persuasion the entrepreneurs needed to accept Lori’s offer, although Chris had almost made it easy for her to win the deal.

STEM Center USA Now in 2018 – The After Shark Tank Update

Immediately after the show, the sisters confessed that gaining Lori as a partner was ‘a dream come true’. Melissa said that her belief in the company and her position as a strong female role-model was also part of the reason for them choosing her over Chris Sacca, but of course, Lori’s offer had been the better one financially, and the sisters were far too smart to give away more of the STEM business than they had to.

Melissa and Lavanya themselves have received a fair amount of praise as strong female roles, since the segment was first aired. The noble aims of the business they founded have been commended by business leaders, educational authorities and they have received a few personal accolades too. ‘Muses and Visionaries’ magazine listed them together as one of the ‘Eight women You Need to Know’, and Melissa was a featured entrepreneur on the popular and influential ‘Business Rockstars with Ken Rutkowski’.

The sisters are embarking on the first steps to launching a franchise program for STEM centers across the country with the investment they gained from Lori in the tank, and although it will be a fairly lengthy process, there can be little doubt that a formidable partner like Lori can only make the genius of Melissa and Lavanya even more effective, as they help the next generation become more knowledgeable about the challenges that will face us all, in the years to come.