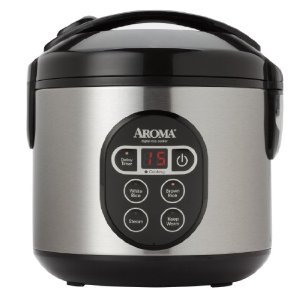 A rice cooker might be the most handy device you could have in your kitchen. Rice cookers function not only in their name, cooking rice, but also can serve as crock pots and even serve up rice cooker-specific recipes (I remember seeing a flourless, cookless cheesecake – just combine the ingredients and put them in a rice cooker!) Rice is an extremely cheap staple that can be spiced, and can be extremely nutritional. For the sake of this review, four rice cookers are going to be covered – the Aroma 8 Cup Digital rice cooker, the Black and Decker RC3406 rice cooker, the Oster 4722 Zojirushi rice cooker, and the Instant Pot DUO60 “7-in-1” pressure cooker.

The Aroma 8 Cup Digital Rice Cooker has a nice, sleek low profile look, and even has somewhat of a leg-up on the other rice cookers in that it has an attached, hinged lid. That means you won’t have to juggle between stirring the rice, adding spices and holding the lid all at the same time!

The Aroma 8 Cup Rice Cooker is available for anywhere from $25 up to $30, based on internet prices, and it includes a nice little complete package. The Aroma rice cooker comes with the capsule itself, a stainless steel bowl safe for the dishwasher, a plastic strainer made specifically for steaming vegetables, and a one-cup measuring cup along with a rice paddle for stirring the rice. The Aroma rice cooker has a digital interface, equipped with certain pre-programmed functions including options for white rice, brown rice, steaming and to simply keep warm. A Delay Timer button is also attached, and allows for an optional delay for up to 15 hours. Underneath the display of how much time remains left to cook sits a light that will show red for being on but not cooking anything, orange for cooking-in-progress, and green for cooking complete. 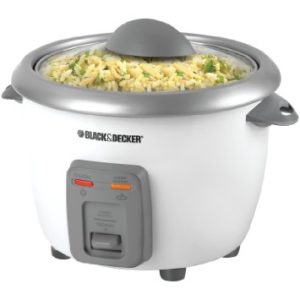 The Black and Decker REC406 Rice Cooker is a little bit more simple of a design; it looks like what you might expect a traditional rice cooker to look like, and this is even reflected in the low price of a range from $15 to $20. Unfortunately, the Black and Decker RC3406 has a small volume, only holding 3 “measures” (the included cup is considered “one measure” of rice, which should yield around 6 cups of fluffy rice when fully cooked. The grips of the rice cooker and the pot lid also have “stay-cool,” rubber-insulated handles that are useful for transporting a rice cooker or getting a grip while cooking. The Black and Decker RC3406 includes the capsule, a non-stick steel pot that’s dishwasher safe, a compartmental bowl (which is small and holds no more than a cup of rice, unfortunately, but great for steaming and cooking rice at the same time), a rice paddle and a measuring cup. The Black and Decker RC3406 is a simple rice cooker without any digital functions, meaning that it simply cooks rice once the button is pushed and then ceases once it detects the rice is moist enough. 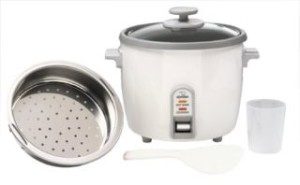 The Oster 4722 Zojirushi is also on the lower end of the scale, costing from around $15 to $20 based on internet prices. The design is a bit more elfish-looking, creating an elongated profile that looks sort of silly when the steamer is attached to the top of it. The Zojirushi has no plastic at all in its design, meaning no nasty chemicals seeping off while cooking rice – the bottom capsule, steamer tray and included bowl are metal, while the lid is pyrex glass and rated as shatter-resistant from drops up to 5 feet. The Oster 4722 also has a relatively small cup, only holding 3 cups of dry rice or doubling to 6 cups of fluffy cooked rice. The interface has two indicators, a red and a yellow light, where the red light will glow when the rice is cooking and the yellow light will glow when the Oster 4722 is simply keeping the rice warm. Included in the purchase of the Oster 4722 is the rice cooker capsule itself, a removable non-stick tray that’s safe for a dishwasher, the lid, a measuring cup and a rice paddle – pretty much the standard kit for a rice cooker. 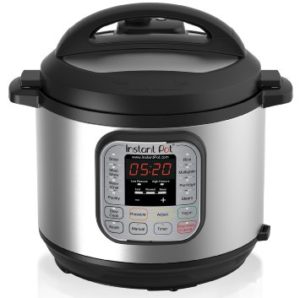 The Instant Pot (IP) Duo-60 blows the other rice cookers out of the water, but the immediate noticeable difference is in the price tag. The IP-Duo60 is available for a whopping $132, but is advertised as a 7-in-1 pressure cooker. The digital interface is equipped with a variety of buttons; soup, meat/stew, beans, chicken, rice (white and brown), porridge and steam. These are just the cooking options, as there are options for slow cooking, making yogurt, pressure cooking, and even sauteing – all on top of the completely-optional “manual” button.

The pressure cooker itself is worth the high price of admission, as pressure cooking is one of the better methods since it evenly cooks through almost everything to give meat or vegetables unrivaled crispness.

The inner pot capacity, which is removable and dishwasher safe, is advertised at holding up to 6 quarts of water – this should equal around 12 cups of cooked and fluffy rice, double what a usual rice cooker holds. The removable cooking pot is stainless steel, as well. Included in the entire package of the IP-Duo60 is the 6 quart removable stainless steel bowl, a removable grill that allows for steaming of vegetables (unfortunately, it has slits instead of a grid, meaning slim vegetables like carrots can easily fall out), a measuring cup, a rice paddle and a deep spoon useful for chilis or stews.

Odds are that if you’re looking for a rice cooker, you’re probably on a tight budget. If that’s the case and savings are your main objective in maintaining a rice cooker, the Aroma 8 Cup Digital rice cooker has many more features than the Oster 4722 and the Black and Decker RC3406 for only $10 more – the most noteworthy feature would probably be the ability to delay a timer, which can be extremely useful for cooking stews or pulled meats while gone all day at work or class.

However, if money is no concern, then the Instant Pot Duo60 is the way to go. Some of the best meals I’ve had have been put through a pressure cooker, and a pressure cooker that has so many functions while still acting as a humble rice cooker is a great buy. The deep bowl also allows for much, much more rice to be cooked at once, which can limit some large families or households in their choice of a rice cooker.