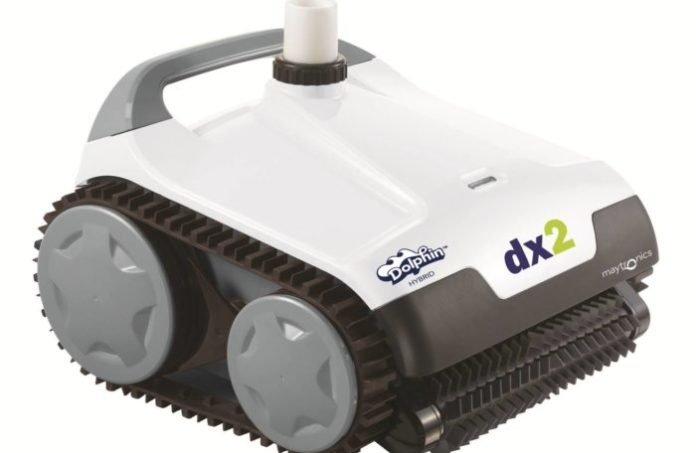 Back into the pool. A few bots to shore up the robotic pool cleaner review line. This week I’ll be taking a look at the Hybrid DX2 from Dolphin. I have always been a fan of Dolphin builds, it was their bots that helped me develop my iron clad list of prerequisites after all. The DX is an odd one though. Another clone bot, this time of the RS1, but good luck finding one of those. These above ground cleaners lack a few things that I call standard. They clean a pool floor, and well, but their lack of features make them significantly less desirable than the mid range bots offered by Dolphin.

The Hybrid DX2 does have a few tricks up its servo motors though, almost unique. It shares many features, and a build methodology with the RS1 and the RS2, but it comes at a more attractive price point. The main thing here is the self powered nature of the build. It has a turbine that provides the bot with necessary power to clean a pool floor and filter the water. So what it lacks in ability it makes up for it in terms of running costs.

So let’s dive right in, see i f this is the right robotic pool cleaner for you. 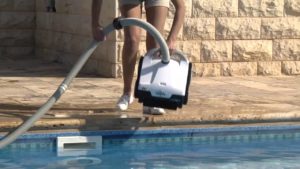 I have been checking out Dolphin builds more so than any other firms bots. Their robots are hardy, and will stand the test of time. Their feature sets tend to the robust and the build quality on offer is top notch. The Hybrid DX2 is no different, a well built machine, though I am not a fan of wheeled builds, they tend to be slightly less efficient than the treaded designs. There is one thing to look out for when buying a bot. The first thing to check the warranty, be sure that you are satisfied with it. The, when you get the bot, take it out of the box and shake it. If you hear rattle then you may have a defective unit.

When it comes to the look, and unlike most builds in the stable, I am not a fan of this one. It already started off on the wrong foot by making the thing grey all over. Not the most pleasing color, to say the least. The actual shape of the build is okay though, and considering the tech used it is not a surprise that they can make it pretty.

Not a huge issue, but one that will come into play when deciding between multiple bots, the RS2 for instance uses similar tech. Wheels may be prone to damage though, so it is something to think about.

I have been reviewing these bots for months, checking out their features, and seeing how well they clean on single cycles, but there is always more to learn. In saying that, I feel I have come to a conclusion regarding what is and isn’t required for a robotic pool cleaner to be considered worth buying. In the features section, these are the ability to clean a pool floor properly including breaking up debris and filtering the water, and the ability to climb the pool wall. The Hybrid DX2 lacks the latter, making it more difficult to recommend it, but it adds something almost unique in the robotic pool cleaner industry.

This is an above the ground cleaner, so if you have an in ground pool you will have to look elsewhere. I haven’t gotten to check out many above ground cleaners, Aquabot seem to have a wider selection of them, but very few of them can do everything. This bot does not come with a swivel cable, using a hose system that connects to your external pool pump. Not much to get tangled in the first place really, there is another issues here, but we will go into detail in the ease of use section regarding that.

The brushes at the bottom are fantastic, able to lift dirt and grime off the pool floor with ease. It breaks down larger debris pretty easily too, which is something I always like to see in a bot. All the electrical power is self generated. Well, it uses your pool pump to turn a turbine, which powers the computer, scrubber and the drive motor. it is very impressive, and cost effective. I feel like the tech is not quite where it needs to be, the power behind the bot is a little lacking, but seen as it costs you very little, read nothing, then all you have to do is keep it plugged into the pump until you’re satisfied.

There aren’t many features here. It cleans a pool but can’t climb walls, but it doesn’t cost anything extra to run and the bot is ludicrously cheap. If the price is the most important part of the equation for you then this might be worth your time. Having the ability to clean a pool floor for essentially nothing, or at least for the price you were already going to pay, could be perfect for some.

The all in one self contained units and the kind that require connection to external pumps. I focus on the all in one models, but these last two weeks have been an education in the benefits of the external pump models, like the Hybrid DX2. The all in one models just require you to plug them in and drop them in the pool, not quite the case for the Hybrid DX2. You have to connect it to your pool’s pump system, and that can be an ordeal. Best to look up online for a video tutorial, as the instructions that come with the DX2 leave a lot to be desired. Once you have it set up you needn’t disconnect it though, so you end up with a sparklingly clear pool year round, all for the price of keeping your pool running.

There are some design issues, though fewer than those seen in the Legacy and Ultra Modern All in one builds. The lack of a handle is conspicuous, whilst moving the bot from place to place is pretty easy due to being so light weight, when submerged it weighs a damn sight more, and hefting it out by the tube is a hassle and a half.

Overall there is only one major issues, the knowledge required to set the thing up in the first place. The weight issues is a minor one, and it won’t exist if you never take the bot out of the pool. I find that the time it takes to set up, even if you are well versed in set up, is a little too long when compared to the time it takes to put an all in one bot in the pool. Better to just leave it connected to the pump. 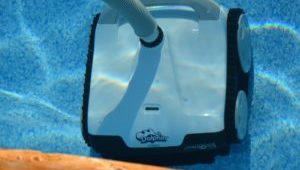 Here is where the choice is made for most of us. I love a cheap robotic pool cleaner, and I am happy to report that the DX2 falls into the $300 to $400 range. It might lack a few features, but for a low up front cost, and a non existent long term cost, this is a fantastic little bot. I always point out that any robotic pool will free up your time, and so depending on how you value an hour, it will pay you back within a year. With the low running costs of the Hybrid DX2, that time frame may well be cut in half.

I talk about price per kilowatt hour here, and general running costs. But the Hybrid DX2 has an on board hydroelectric generator, something of a rarity in robotic pool cleaners. It will cost you no more to clean your pool than it does to own the pool. I recommend looking up how much you pay to keep your pool pump pumping, that way you can see the long term effects anyway, but you don’t have to worry about the cost of maintenance anymore, and that is a good deal.

Now to the warranty. I review products for a living, so I get to read an awful lot of warranties. I can spot the good one, like the Limited Haywards, and the bad ones, like the Limited Aquabot, but what I cannot do is read minds. I have yet to receive Dolphin’s warranty. I have made numerous enquirers at Maytronics, requesting the information and they have yet to get in contact with me. It is a black mark on the DX2 that it simply cannot afford, seen as how it is already on the ropes after the Features section. They are not the only firm who have ignored my requests for more information, so it might just be a thing that robotic pool cleaner manufacturers do. What I can say about the Hybrid DX2 is that is comes with a 6 month Bumper to Bumper Warranty. Usually bumper to bumper covers everything, but that tends to refer to cars. Not sure how it translates to robotic pool cleaners.

Ups and downs for the most part. I love the tech behind this one. The ability to run indefinitely is nothing short of astounding. The little generator in this bot is pretty powerful, though it is not as powerful as an all in one model. The lack of features is made up for by the low long term and short term costs. While I find it somewhat difficult to use correctly, there are certainly worse bots out there. Worth it for the thrifty.