What Happened to Michael Schumacher-News & Updates 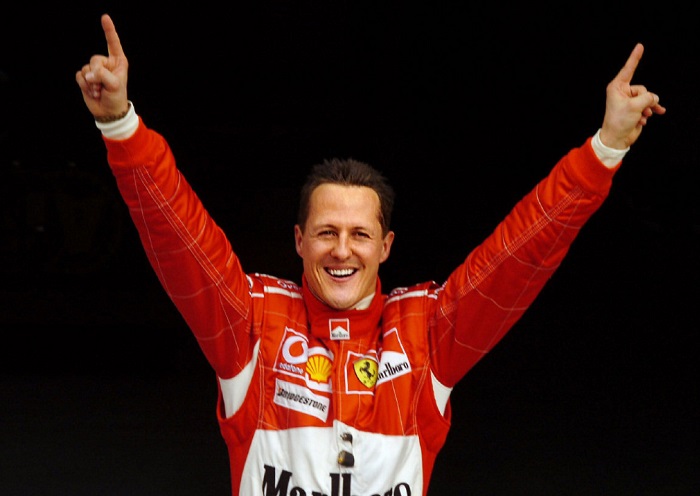 In 1991 a Formula 1 driver was involved in a minor traffic incident with a taxi driver in London, England, and the events that followed led to the rise of the most successful driver the sport has ever known. The driver was Frenchman Bertrand Gachot, who drove for the recently formed Jordan Grand Prix team, and when his low speed collision escalated into a heated argument with the taxi driver, he reacted by spraying CS gas into the face of the enraged man.

Unfortunately for Gachot, CS gas was, and still is illegal in the UK and he soon found that his act of self defense had landed him in trouble with the law. He eventually ended up with a six month jail sentence for his actions, and Jordan Team boss Eddie Jordan desperately began looking for a suitable replacement for the upcoming Belgian Grand Prix. Eventually Eddie chose a young, but promising, Mercedes driver from the World Sportscar Championship to replace the unfortunate Bertrand Gachot in the race, that driver was Michael Schumacher and he was soon to set the World of Formula 1 alight.

Michael Schumacher was born on January 3rd 1969 in the town of Hurst, in Germany’s North Rhine-Westphalia, to Elisabeth and Rolf Schumacher. When Michael was four his father, a bricklayer, modified his pedal kart with a small motorbike engine and it wasn’t long before the boy was showing a surprising turn of speed in it. Shortly afterwards Michael crashed the kart into a light-pole and his slightly concerned parents enrolled him at a local karting track where he was the youngest member.

Michael’s lack of experience was no barrier to his natural talent, and under the guidance of the karting club he won his first club competition at the age of just six. Helped by his father, who took a second job to help fund Michaels passion for racing, Michael’s speed and technical driving ability progressed in leaps and bounds. He won the German Junior Kart Championship for the first time aged 13 and began receiving sponsorship from Eurokart after the achievement. In 1988 he became the European Karting Champion and then began the long process of working his way towards his ultimate ambition, driving in the Formula 1 championship.

After leaving school in 1989 Michael began racing in the German Formula 3 series, he won the title the following year and his startling speed, particularly in difficult driving conditions, soon brought him to the attention of Mercedes, who enrolled him in their junior racing program. Further success followed for Michael as he took fifth place in the drivers championship that year. He took part in the legendary 24 hour race at Le Mans in France in 1991 and achieved an impressive fifth place. Mercedes selected Michael as their driver for the 1991 World Sportscar Championship and he won the final race of the season, but fate intervened when Bertrand Gachot encountered legal problems in England, and Michael found himself suddenly thrust into the limelight at the Belgian Grand Prix.

Michael’s début race in Formula 1 was not destined to be too memorable, but it was vehicle rather than the driver that was at fault. The gearbox of his car failed before even one lap had been completed and he was forced to retire from the race, but the newcomers impressive seventh place in qualifying had been more than good enough to impress Eddie Jordan, and he offered a deal to Mercedes that would see Michael race in the Jordan team for the rest of the season. Despite that, Schumacher was offered a place with a rival team, Benetton-Ford, for the next race in Italy and he eagerly took the opportunity to race in a faster car.

Michael astounded the World of Formula One by finishing fifth in the Italian Grand Prix, ahead of his team-mate the former World Champion Nelson Piquet, and Benetton quickly signed him into a permanent contract for the rest of the season. He eventually remained at Benetton for the next five years, but in that time the World of Formula 1 changed forever.

Formula 1 in the early nineties was dominated by one of the fastest drivers ever, the brilliant Brazilian Ayrton Senna. Senna’s instinctive understanding of cars, his supernaturally fast reflexes and incredibly competitive nature had seen him crowned as World Champion three times, and in 1994 he was at his peak. He had won the Championship for three of the last five years, and his long standing feud with French driver Alain Prost had resulted in thrilling battles between the two on many occasions. Prost had retired by 1994 but Michael Schumacher was beginning to show his incredible talent, and that year he was ahead of Senna in the drivers championship after winning the first two races of the season.

In the third race of the 1994 season, at San Marino, tragedy struck. In the practice session the day before the race, the sport suffered the first death of a driver since 1982, when Austrian Roland Ratzenberger crashed heavily and suffered a fractured skull, which quickly proved fatal. The following day, on May 1st , Ayrton was leading the race for the Williams team, with Michael following close behind, when he suddenly failed to steer out of the high speed Tamburello corner. Senna’s car smashed into a barrier at over 130 MPH and he received serious head injuries that he succumbed to within minutes. Michael won the race when it was restarted, but he was far from jubilant at the win under the tragic circumstances.

Michael went on to win his first Formula 1 championship that year, winning half of the 16 scheduled races, and he defended his title successfully for the Benetton team the following year. In 1996 Michael was persuaded to join the struggling Ferrari team with a $30 million a year benefits package that would see him driving for the team for the next two years. He was soon joined at Ferrari by Former Benetton technical director Ross Brawn and their winning combination soon led to Ferrari reasserting the dominance they had enjoyed decades previously.

Michael won three races for Ferrari in the 1996 season, more than the team had won in the five previous years, the car had reliability problems and Schumacher was forced to retire in six races that season, but he still managed to finish third in the drivers championship. In 1997 Michael was competing for the title against Jacques Villeneuve in the final race of the season, in Spain, when he was involved in a controversial collision with his rival. Michael retired after the incident and Villeneuve went on to take the title, but his results at Ferrari had promoted the team well into contention for the next years championship.

Michael continued to be beaten at the final post whilst at Ferrari for the next few years, notably in 1999 when his brakes failed, hurtling him into a barrier at 180 MPH, which resulted in a broken leg and another missed opportunity to win the drivers championship. But as the new millennium dawned Schumacher entered his golden age, and over the next few years became the most successful driver F1 had ever seen.

He won the drivers championship for the next five years, from 2000 until 2004, and in the process beat all previous records. He surpassed Senna’s record of most race wins and completely dominated the sport during those years. His mastery in the rain led to him being labelled ‘Rain God’ and virtually every race during the period that was held in wet conditions resulted in a win from Schumacher. In 2002 he won the drivers championship with six races still to take place, a feat that has never been equalled, and eventually ended the season with the largest points margin between first and second placed drivers ever.

In 2004, his final Championship winning year, Michael won 12 out of the first 13 races, only failing to win at Monaco after a collision with Juan Pablo Montoya. He eventually won 13 races out of 18 in another record that stands to this day.

Changes in regulations led to Ferrari becoming uncompetitive from the 1995 season onwards, and Michael’s championship winning years came to an end, but he remains to this day the most successful driver that Formula 1 has ever seen, statistically speaking at least. Michael’s mastery in wet conditions are beyond doubt, and he is generally considered the best wet-weather driver that has ever competed in Formula 1.

On December 29 2013, Michael was with his son Mick on a skiing vacation in the Swiss Alps. While skiing off-piste he fell and banged his head against a rock. Despite wearing a protective ski helmet Michael received severe head injuries and was put into a medically induced coma in order to stabilize his condition. He was gradually taken out of his comatose state but had received brain injuries that severely affected his quality of life. In November 2014 it was reported that Michael was unable to walk or talk, was confined to a wheelchair and was suffering from memory issues.

By mid 2015 Michael’s manager reported that his condition was gradually improving, but she did not underestimate the severity of his injuries, warning that he faced a long struggle to regain his health. He was moved from hospital that year to receive specialist medical care at his home on the shores of Lake Geneva, where a special fully equipped medical center was built for the purpose.

Details about Michael’s condition have been few and far between since his accident. His manager, Sabine Kehm, has criticized some in the media for ‘raising false hopes’ by claiming that Michael has begun to walk again. But in August 2016 some positive news came from the former Ferrari chairman, and friend of the Schumacher family, Luca Cordero di Montezemolo. Luca has confirmed that Michael’s fighting spirit has not diminished and he is determined to recover as quickly as possible, but sadly the Michael Schumacher of 2016 is unlikely to ever fully regain his physical health after such traumatic injuries.

Michael married wife Corinna in 1995 and the couple have two children, a son Mick and a daughter Gina-Marie. Now in 2018, Corinna continues to nurse Michael back to health at the specially built medical unit at the couple’s home in Switzerland, where they have lived together since 2007.