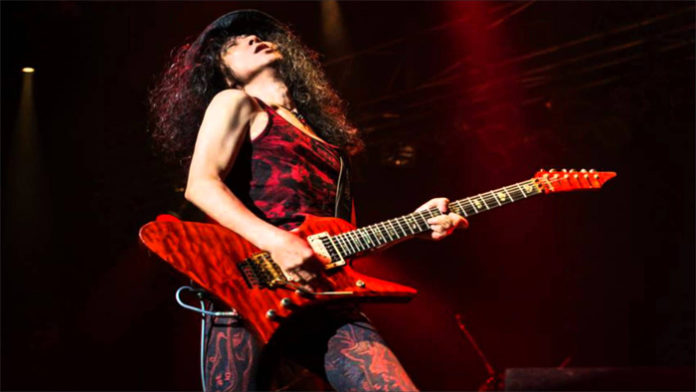 Kyoji Yamamoto is perhaps best known for being the leader of the Japanese hard metal band, Bow Wow. Born in Shimane, Japan, he always had his eyes set on becoming a professional musician. After studying at the Yamaha Music School for several years in the early 70’s, he was scouted and invited to join the up-and-coming hard rock group, Bow Wow. Formed by an amateur music producer named Yoshimi Ueno, the band also consisted of Toshihiro Niimi on drums, Mitsuhiro Saito on guitars, and Kenji Sano on bass. Wasting no time in securing a recording contract, they soon signed with Victor Entertainment in 1975. Just a year after getting together for the first time, the foursome released their eponymous debut album, Bow Wow in 1976. From there, they performed at a few concert tours in Japan before dropping another full length album entitled, Signal Fire in 1977. Later that same year, Yamamoto and his crew came out with yet another studio, Charge.

Despite their best efforts however, their initial albums from the 70’s- especially their production values, were generally criticized by fans. It wasn’t until they recruited the help of renowned music producer Touru Yazawa, that they began to set a name for themselves with the release of their seventh studio album, Hard Dog (1981). Going on to attract a solid fan base, Bow Wow has since recorded over a dozen full length albums including Warning from Stardust (1982), Led by the Sun (1996), Beyond (2000), Another Place (2001), What’s Going On? (2002), and Era (2005). On top of that, they’ve also released six EPs, seven live albums, thirteen compilation albums, and over twenty singles; some of their most popular titles include Sabishii Yuugi, Soldier in the Space, Keep on Rockin’, Gonna be Alright, Take Me Away, One Last Time, and King or Queen. Although they officially disbanded in the summer of 1990, they have since come back together for a number of reunions.

Aside from being known for his affiliation with Bow Wow, Yamamoto has also embarked on a successful solo music career. Regarded as one of Japan’s most skilled guitarists, he is also noted for being one of the first to incorporate the tapping technique into hard rock music. At the age of twenty four, he released his debut solo album entitled, Horizon after signing with the Sounds Marketing System label.Two years later, he followed up with Guitar Man (1982), and Electric Cinema (1982), both of which were generally well received. As of 2017, he has come out with a total of ten studio albums- his latest being that of Philosophy, which was made available in 2014.

So what has Yamamoto- one of Japan’s most renowned guitarists been up to these days? At sixty years old, has he retired from recording? Or is he still actively making music at the studio? What can we expect to see from him this upcoming year? What happened to Kyoji Yamamoto? Where is he now in 2018?

Kyoji Yamamoto’s Early Life and the Formation of Bow Wow 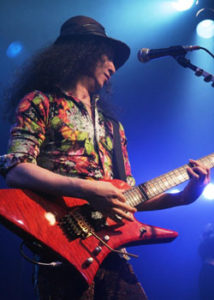 Born on March 23, 1956 in Shimane, Japan, Kyoji Yamamoto spent most of his early life in the city of Matsue. Growing up, he often found himself listening to music. Eventually wanting to try his hand at performing, he decided to pick up the guitar at the age of fifteen- drawing inspiration from Eddie Van Halen and Alvin Lee; practicing for hours every day, he soon found himself having mastered the stringed instrument.By the time he was eighteen, he was studying music at the renowned Yamaha Music School in Japan. Bursting with natural talent, his skillfulness on the guitar garnered him much attention as a student; before long, people around him had started to refer to him as a guitar genius.

At the age of nineteen, he was recruited as a guitarist into an up-and-coming heavy metal group called Bow Wow, that had been formed by an amateur music producer named Yoshimi Ueno. Scouted from the music school alongside his classmate Kenji Sano, they were the third and fourth members of the original lineup; the other two bandmates included Toshihiro Niimi on drums and Mitsuhiro Saito on guitars. Having officially come together as a band, they eventually signed with Victor Entertainment, a Yokohama-based recording label in 1976- just a year after meeting each other for the first time. 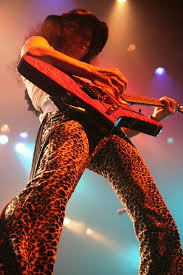 In 1976, Bow Wow released their self titled debut album, Bow Wow. Produced by Yoshimi Ueno, who put the group together, it featured Yamamoto on lead vocals, lead guitar, as well as drums. Just over thirty minutes in length, the album boasted eight tracks including the titles Heart’s on Fire, Brown House, A Life in the Dark, James in My Casket, Withered Sun, and Theme of Bow- all of which featured a mix of English and Japanese lyrics. Although not an instant smash hit in their native Japan, it was considered a solid album by fans.

Determined to put themselves out there in the Japanese hard rock scene, they later dropped their second full length album, Signal Fire in 1977. Comparable to their initial effort in terms of content, its sounds were fairly typical for metal groups of that period. Another album to feature Yamamoto as the lead vocalist and guitarist, its ten-song track list consisted of Get on Our Train, Just One More Night, Rock ‘N’ Roll Drive, Rainbow of Sabbath, Tell Me Tell Mee, Still, and Silver Lightning, among a few others.

That same year, Bow Wow also came out with their third studio album, Charge. A track shorter compared to their previous release, it featured the numbers Must Say Adieu, Jet Jive, The Clown, Blue Eyed Lady, Behind the Mask, Sister Soul, Rock and Roll Kid, and Fallen Leaves. To promote themselves and their new album, Yamamoto and his bandmates performed the opening act for the popular bands Kiss and Aerosmith during their JApanese concert tour. Despite their best efforts however, the album was generally criticized by critics for its poor production values and for being “all over the place”. 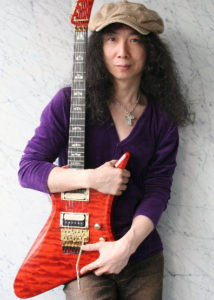 It wasn’t until they employed the help of Touru Yazawa, the music producer responsible for Alice- a renowned group in Japan, in the late 70’s that their popularity slowly began to rise. With Yazawa, they released their studio album, Hard Dog– which marked a turning point in their career in 1981. Mixed by Susumu Iguchi, the two sided disc came with a total of eleven tracks, including Gonna Be Alright, Can’t Take It Anymore, Breakdown of the Earth, My Dear Alarm Clock, Close to the End, New Red Books, and a few others. Although it still garnered a fair amount of mixed reviews, many critics praised it for being a vast improvement over their earlier releases. Shortly after the release of the album, Bow Wow gave a couple of performances at Switzerland’s Montreux Jazz Festival and at England’s Reading Festival, which helped boost their popularity.

Over the next few years, the hard rock band saw a few changes to its original line up. Following the departure of guitarist Mitsuhiro Saito, the group welcomed two new members- Rei Atsumi and Genki Hitomi on keyboards and vocals respectively. Feeling that a name-change was necessary, the quintet subsequently named themselves Vow Wow- a decision that was partly influenced by the name of the British group, Wow Wow.

After many years of being in Japan, Bow Wow relocated to England in 1987. From there, they worked with music producer Kit Woolven for the release of their album, V– which eventually spawned the hit single, Don’t Leave Me Now. Another studio album later, they released Rock Me Now, a number that is still considered a classic hard rock hit to this day. Shortly afterward, Yamamoto and the crew returned to their native country briefly for a Japan tour. In 1989, Bow Wow came together to record what was to be their last album, Helter Skelter, which was produced by Tony Taverner.

Although they officially disbanded in 1990, Bow Wow has since reunited several times. For instance, they came back together for a few more releases in 1995, and later reunited once again in 2009 for a reunion show concert in 2009. 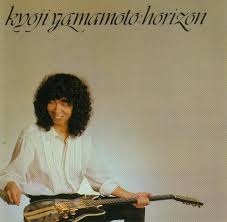 Aside from having had a successful music career with Bow Wow, Yamamoto has also carved an identity for himself as a solo recording artist. On May 25, 1980, the guitarist released his debut studio album entitled, Horizon under Sounds Marketing System. Recorded in various studios in Tokyo, the original album contained nine tracks including Summer Get Away, Solid Movement, Crush the Rock, Chasin’ the Shadow of You, Dog Fight, and Guitar Man– a number of which were instrumentals; altogether, the album boasted close to forty minutes of hard rock music.

Two years later, Yamamoto came out with his second full length album, Guitar Man. Distributed via SMS Records, the hard rock album came with a two-sided disc that contained a total of fourteen songs; some of the more memorable hits include Theme from Bloody Mary, Soldier in the Space, Chasin’ The Shadow of You, Breakdown of the Earth, Guitar Man, Scramble, and Solid Movement.

Prior to taking a prolonged break from his solo music career, the guitarist came out with a third studio album entitled, Electric Cinema. Recorded in London with a few members of the British rock band Last Flight, it consisted of ten titles, a few of which included Could This Be Magic, I’ll Wait a Lifetime, Just Can’t Take It, On the Edge, Love Lies Bleeding, E. Bow Concerto in D Minor, and Yomegashima. While all of the songs featured Yamamoto’s skillful guitar playing, four of the tracks saw him as the lead vocalist.

It doesn’t look like the 60-year-old hard rock musician has given in the towel yet- in fact, just this past January, he performed a concert at the Shinyokohama Strage in Japan- one of the many shows that he’s put on since the start of 2017.

According to his official website, he also has a few upcoming shows in Kyoto, Yamaguchi, Shimane, Aoba, Chiba, Saitama, on top of many others. From the looks of it, his schedule from now until July appears to be quite packed- the bad news is that, most of the planned events will be taking place in Japan. For more information, you can visit his official website- do note however that most pages are only available in Japanese.

If you’d like to keep in touch with the Japanese guitarist, your best bet is probably to check out his official website as mentioned earlier, at kyoji-yamamoto.com. Having said that, you can also visit his Youtube channel at @wildlandcorporation.