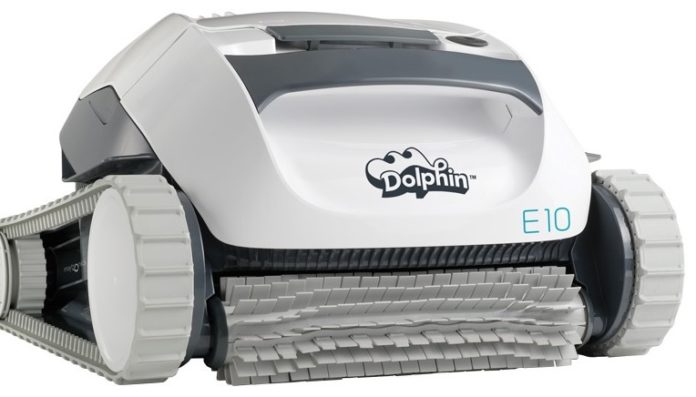 I told you I would be back as soon as one of these robotic pool cleaning firms released another bot, and with Dolphin putting out the E-Series I am back. A little less excited to find out that the E10 is a rebranded Active 10, but no less happy to pass on my knowledge, make sure you get the robotic pool cleaner you are looking for. The E10 bills itself as an all rounder pool cleaner, and while that it technically true, the Active 10, a variant of the bot, was said to be mainly for use in above ground pools. I have done my research, and the differences between the two bots are negligible, so that claim comes into question a little.

The E10 is a great product, of that I am not arguing, what I am here to do is lay out its strengths and weaknesses, letting you make an informed decision, figure out if the abilities of this bot match the needs of your pool. Without further ado let’s get down to it! 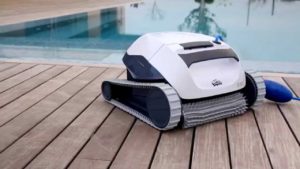 One of the many design decisions that I love about the E10, and its clones, is the use of treads. It is these that allow the bot to function fairly well in in ground and above ground pools at the same time. It lacks a few features that i consider essential, but we’ll go into that in a moment.

In terms of core build quality the E10 is solid, the parts fit flush, and the overall aesthetic is lovely. I prefer the color scheme used in the Active series of bots, but the understated grey used here makes the bot very easy to see under water. The handle is well placed, and a bit of s necessity, while the bot is light out of water, once it is in the water it becomes somewhat difficult to pull out.

Remember to do the rattle test when you get the bot. All the parts to a robotic pool cleaner should fit well, and any noise made when shaking the bot a little is a sign of a manufacturer’s fault. Thankfully the E10 comes with a decent warranty, in terms of length if not in terms of contents.

While the build quality is important, the looks of a bot tend not to be, on the whole. unless you know you want this bot, in which case it helps to know that there are five other bots that share the design, but not the color scheme. The 10 is not the only one, there is also the S50, the Echo Sunbelt, the Escape and a build licensed to Pentair to keep an eye out for. great for the consumer that, as it makes getting the cheapest price all the easier.

While it has been a long time since I reviewed a pool cleaner, I have not forgotten my set of prerequisites. There are only three of them, so I feel I do not ask for much out of my robotic pool cleaners. The ability to climb a wall, the ability to scrub up the worst of the floor and capable of filtering a large volume of water in a timely fashion. The E10 can only do two of those things. It cannot climb a wall, at least Dolphin do not claim that it can climb a wall. There are reports of it climbing some peoples walls, but by default I think it is better to stick with the manufacturer’s information. A bad start this.

The E10 is primarily an above ground pool cleaner, though it will work well enough in in ground pools too. The cord is only 40 feet though, and of your pool is a little bigger you might be a little less than happy with the E10. It has a swivel cable though, and they go a long way to preventing cycle stoppages. If you have owned a non-swivel cable build in the past you know how irritating it can be to have to pull the pool bot out of the water to reset the cleaning cycle.

The front mounted scrubbing brushes are hardy, I’ll give the E10 that. They are more powerful than most in the Dolphin stable of robotic pool cleaners, spinning at nearly twice the speed of the much vaunted Nautilus. They make short work of any debris, from algae to calcification. Average cycle time is around one and a half hours, which puts it in the faster category. I have to bring it up again though, it cannot climb a wall, and that is more important than a lack of remote control or filter indicator. There are other bots in this line that can, and the core tech used is very similar, having this feature missing here is both confusing and disheartening.

This is a bare bones product that sports some of the most advanced design work that Dolphin have ever released. It’s a shame that so good a build is let down by this one downside. Price wise it is very attractive, but the same can be said of the better bots in the same range. I can see a market for this, make no mistake, but if you are unwilling to clean your own walls then you are better off looking elsewhere.

Maytronics Dolphin E10 Ease of Use

There are a few categories that I place robotic pool cleaners into. The most fundamental is the all in one models vs the older external pump models. I have reviewed both, and can see the appeal of the external pump system builds, they are cheaper to run for a start, but I prefer the simplicity to the all in one models, like the E10. I have further distinctions within the all in one ranges. The Ultra Moderns and the Legacy builds. The Ultra moderns have top loading filters, and tend ton use meshes over bags. In terms of function they are nearly identical, but in terms of ease of use the Ultra Moderns are king. Well, they were king. The E10 belongs to a kind of cleaner I am calling the Post moderns. Instead of a filter mesh it uses a filter canister, and his thing really is a game changer.

It is still top loading, so there is no need to flip the bot over to change the filter, and unlike the filter mesh system used in the last gen models, cleaning out the cleaner is not an issue. All you have to do is take the canister out, hose it down and you are ready for another cycle. I really cannot overstate how easy it is to use these things. So, the older nit pick issues I have to go into here are gone.

The E10 is one of the easiest to use bots on the market., Some clever design work goes a long way, and the addition of a handle is a god send. At its core you will only have to plug it in, set the cycle, dump it in your pool, let it run, take it out, undo three clasps, take out the canister, hose it, and replace it. Done. 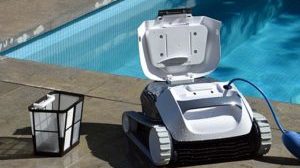 When I reviewed the Active 10 it was like being on a roller coaster. I rode high on the build quality, then fell with the features, then high again with the ease of use, only to sink a little below the floor at the pricing. Here it is similar, except the pricing is actually on point. You can usually get the E10 in the $500 price range that said you can sometimes get it for a better deal at Amazon.com by clicking here. Considering the ups and downs on this review that is a very reasonable price, far better than the price of the Active 10 late last year. It is important to remember the amount of time a pool cleaner like this saves you.  Depending on how you value that time, investing in a bot will pay you back in full well within a year. Even faster if you go with the E10.

There are a few additional costs associated with owning a robotic pool cleaner. The price per cycle is the main one. While manufacturers have done their best over the years to drive down the amount of electricity their builds use, we are still looking at around a 150 W power draw. With the average cycle time taken into account you would be spending around $0.15 per clean. Not a huge figure, I agree, but over time that will add up, and I am a strong proponent for folk knowing how much it costs to run all the electronics they enjoy on a daily basis. That price really depends on the cost of energy in your area, and it is a good thing to get to know what that number is. I have seen in a few areas that price going as high as $0.19 per cycle, and as low as $0.11 per cycle, so it can vary.

Let’s talk warranty. I love warranties. I do a lot of product reviews, and so I’ve become somewhat of a pro (if that’s such a thing) at reading through and deciphering warranties, essentially making sure folk aren’t being hoodwinked by warranties. With robotic pool cleaners it can be a little on the random side. A warranty that says limited might be amazing, as it is with the Hayward’s line, or it might be worth less than the paper you printed it out on, like the Aquabot warranty. Thankfully Aquabot also offer a full warranty as well so that is less of an issue. I am happy to say that the Dolphin E10 comes with a full year of coverage, and it is fairly comprehensive. This warranty covers labor, and in most cases parts too. I mentioned earlier that it is important to make sure that, before you use the bot, that you verify the condition of the parts, and the fit. So long as that is good you should be fine.

A bit of a mixed bag to say the least. It is a better purchase than the Active 10, by virtue of the price, but at its core it is still as odd a bot as any out there. I do not understand why it cannot climb and clean a pool wall. It is a core tenet of my recommendation policy, and seen as it is not present here I cannot recommend the bot. If it is not a concern for you personally, then you’re golden. You can get a great core bot at a great core price. For the rest of us it is better to look up the ladder at the Active 20, E20 or the Cayman.

To check out the current discounts and prices on the E10 at Amazon.com you can click here.