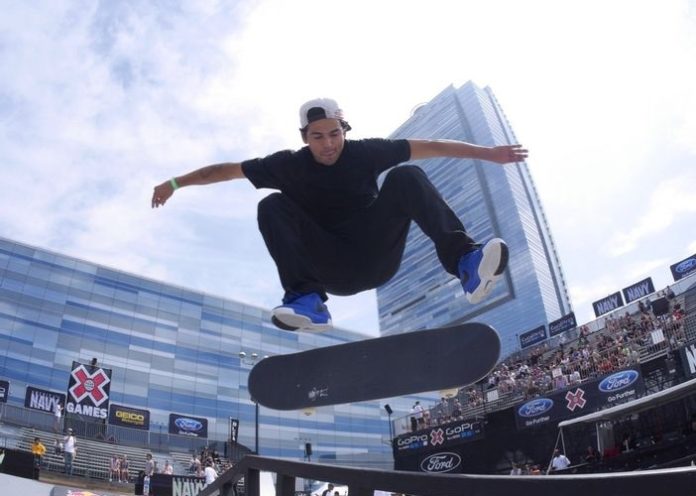 Paul ‘P-Rod’ Rodriguez is one of the most exciting and dynamic street skateboarders of recent years, he has achieved a succession of accolades at the X-Games and won an army of fans with his incredible skills. But the good-looking guy from Tarzana, California is not only an accomplished skateboarder, he’s also a shrewd businessman with a multi-million fortune that he has built from a number of profitable business ventures, several lucrative sponsorship deals and an acting career that could well be bigger than that of his famous father. But how much is the golden boy of Skateboarding worth now in 2018 and how exactly did he make all that money? Read on to find out.

How Did Paul Rodriguez Make His Money & Wealth?

Paul Martin Rodriguez Jr was born December 31th 1984 in Tarzana, California. His father Paul Rodriguez is an actor and stand-up comedian best known for ‘The Paul Rodriguez Comedy Rehab’ as well as his work on many films, TV specials and extensive charity work.

Paul Jr picked up his nickname ‘P-Rod’ from school friends at about eleven years of age, and at twelve his mom Laura gave him a christmas gift of his first skateboard. Paul was fascinated with skateboarding tricks and the ability of other skateboarders he knew to keep the board glued to their feet, and he soon lived and breathed anything skateboard related. His passion for the sport was so great that he would sleep with new skateboards and accessories whenever he got them.

By fourteen Paul was skilled enough to audition for a place on the team of a local skateboard store called ‘One Eighteen’. He was initially too shy to approach the store himself and asked a friend to deliver his audition video, but the manager of the store, Andy Netkin, was so impressed with his skills that he called Paul in and offered him a place on the team the following day, explaining later that he had a strong feeling that Paul had superstar qualities. By fifteen Paul had attracted his first sponsor, DNA Skateboards, and he appeared in their 1999 promo ‘Microanalysis’ where he showed the impressive array of skills that he had already mastered.

Paul next began riding for City Stars, a Los Angeles based team headed by professional Kareem Campbell. Paul was still an amateur at the time but was honored by a showcase of his skills in the final segment of the ‘Street Cinema’ video, which was usually reserved for professionals from the team. Paul later described his time at City Stars as magical and paid tribute to the teams contagious passion and enthusiasm, but he was soon moving on to bigger and better things.

In 2002 Transworld Skateboarding featured Paul in their 2002 video, ‘In Bloom’, which mainly showcased up-and-coming future stars of the skateboarding World, and soon afterwards Paul turned professional and joined Girl Skateboards at the request of professional skateboarder Eric Koston, who he greatly admired. He stayed with Girl for two years until he was nineteen, and during that time Girl produced his first professional signature skateboard and he appeared in the ‘Yeah Right’ video promoting the company.

He was awarded the Transworld Rookie of the Year award that year and although he loved working with Girl at the time, and regarded them as a career-long sponsor, he was soon approached by the legendary skateboarding stuntman Danny Way who asked him to join the newly re-launched Plan B Company, and P-Rod was moving on again.

Paul worked with Plan B for the next decade, and during that time he also made his impressive mark in top-level competitive street skateboarding. He began by taking fifth place at the Tampa Pro competition in 2002 and the following year he made his debut at the X-Games in Los Angeles, winning the Bronze medal there. He took the Gold for the next two years and returned again in 2008 to take second place. In 2009 he won the X-Games in Los Angeles again as well as a second place finish at the Tampa Pro street competition, and the following year he won the third annual Battle of the Berrics as well as taking first place at the Tampa Pro event.

2012 saw Paul take a fourth Gold at the Los Angeles X-Games and a second place in The Battle at The Berrics, and in 2013 he took a silver when the competition moved to Barcelona for the Street League Skateboarding (SLS) partnership competition. More SLS victories followed the same year when he won the Munich X-Games/SLS partnership event and the SLS event in Portland, Oregon, he also managed a third place result in the Dew Action Sports tour event and another second place at Berrics the same year.

Paul’s growing popularity and success in professional skateboarding saw him involed in many other projects during his time at Plan B, he appeared in several video games, including ‘Tony Hawk’s Underground’, and ‘Tony Hawk : Ride’. He began taking an interest in following his fathers footsteps and starred in the 2008 drama film ‘Vicious Circle’, skateboarding movie ‘Street Dreams’, released in 2009 as well as several appearances in the MTV reality show ‘Rob Dyrdek’s Fantasy Factory’. Paul also appeared in the 2013 documentary film showcasing the World of professional skateboarding, ‘The Motivation’.

In 2013 Paul wanted to expand his personal business interests and left Plan B to further his own interests more. The following year he launched Primitive Skateboarding, his signature skateboard deck company and that year also saw the release of his sixth signature shoe in collaboration with Nike and the beginning of his involvement with the Glassy Sunhaters sunglasses brand. In May 2014 Paul released his eighth signature shoe in collaboration with Nike, the ‘P-Rod 8’ and the company revealed the truly exceptional nature of Paul’s popularity by announcing that only three other athletes have ever had eight signature shoes produced, namely Michael Jordan, LeBron James and Kobe Bryant.

Paul’s successful decade long partnership with Nike is not his only sponsorship by a long shot, he also endorses Nixon Watches, Glassy Sunhater sunglasses, Venture, Markisa, Andale Bearings, and since 2010 he has also been involved in promoting Target through personal appearances and the Target brand on his Skateboards. He has previously been involved in endorsements with Mountain Dew and others and also owns a private skateboard park in California that was designed using initial designs from Paul enhanced with advanced computer aided design.

In 2011 Transworld SKATEboarding ranked Paul as the 30th most influential skateboarder of all time, and along with his obvious skateboarding abilities, his wise business decisions and numerous lucrative endorsements have seen him build a net worth of $6 million in just over a decade of professional fame. In a 2014 interview Paul commented that he was a young entrepreneur who is only beginning to learn the ropes of the game, but he revealed that his personal philosophy and attitude towards business is to work with people that are just as passionate about their chosen career as he is about his.

Paul Rodriguez has never married, although he did have a long-term relationship with Rainbow Alexander that culminated in the couple having a daughter, Heaven Love in 2010. By 2013 the couple had split and Paul was dating Youtube DIY guru Rachel Metz, but in later interviews he has downplayed questions about his private life by asserted that he is a ‘certified workaholic’ who considers his professional career, fatherhood and skateboarding to be the most important things in his life.

Paul’s annual income is estimated to be approximately $3 million per year from his string of endorsements, the Primitive Skateboarding Business and other income streams. Paul has also expressed his personal desire to not only expand his business interests, but also to follow his father by expanding his contacts in the entertainment industry and to pursue a career in showbusiness to a greater extent in the future.

Where Does Paul Rodriguez Live?

Paul has not splashed out on a mansion so far and still lives in a modest, but fairly luxurious apartmentment he owns in Los Angeles, California.

What Car Does Paul Rodriguez Drive?

Paul wheels are a top-of-the-range Mercedes SLC with all the available accessories that is worth over $180,000. He has owned his pride and joy for several years and although he has matured since his teenage years, he was reportedly once known for driving it at fairly terrifying speeds around California and the Los Angeles Area.