Dennis Rodman Net Worth 2018 – How Rich is The Basketball Star Now? 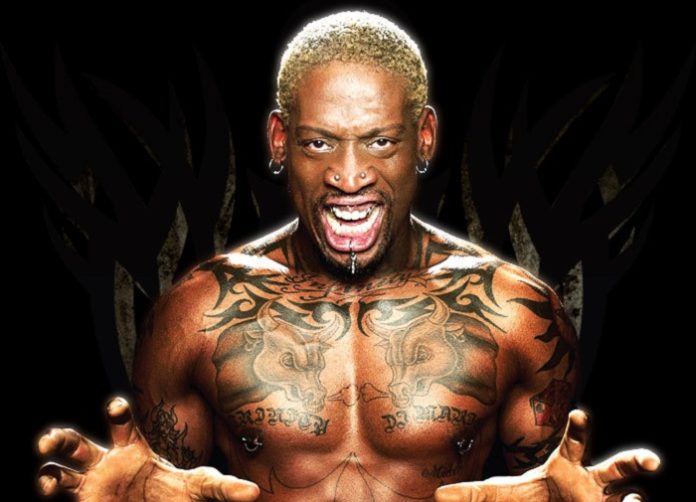 Dennis Rodman is one of the most celebrated basketball players of all time. During a career that lasted twenty years he became known for his legendary rebounding and defensive skills, and set a new level of ability for rising new stars of the sport to aim for. His basketball career was legendary, but Dennis Rodman is well-known internationally even by those who have never watched a basketball game in their lives.

Dennis has led a life that has been almost as colorful as the ever-changing hues of his hair. His eccentric behavior has at times been bizarre and outrageous, while at others he has achieved the impossible by forming a close bond with the North Korean leader that has left diplomats and politicians completely at a loss for words. There will only ever be one Dennis Rodman, and his unique athletic abilities saw him earn millions during his career, but exactly how much is the most interesting basketball star of all time worth now in 2018? Read on to find out.

How Did Dennis Rodman Make His Money & Wealth?

During his early years Dennis Rodman didn’t seem to be destined as a future athletic legend, particularly in the sport of basketball. He was born in Trenton, New Jersey on May 13th 1961 but after his father, who had at least 26 children with a number of different women, left the family and moved to the Philippines, Dennis’ mother Shirley took Dennis and his two sisters, Debra and Kim, to live in the turbulent Oak Cliff area of Dallas. Surprisingly Dennis was considered less talented at basketball than his sisters, he was only five feet six inches tall during his high school freshman year and by his own admission he was generally unable to hit a layup during that time, While his sisters went on to become All-Americans at college, older sister Debra even helped win successive national titles as a member of the Lady Techsters at Louisiana Tech University.

Dennis however showed no such sporting promise at first, he was on the school basketball team but was usually not part of the squad, or he was benched, he also tried to make the school football team, but was unsuccessful, a result that he admitted was ‘devastating’ at the time. He took a job at the Dallas Fort Worth International Airport as a night janitor after completing school, but while he was working there he had a late spurt of sudden and rapid growth, which eventually ended with the impressive six feet seven inch height he boasts today. He gave basketball another try and this time he began to show some of the legendary skills his professional career later became noted for.

Dennis went to Cooke County College in Gainesville, Texas for one semester and managed an average of 17.6 points, and 13.3 rebounds a game. He moved to Southeastern Oklahoma State University in 1983 and worked on his basketball skills with impressive results. He was ranked first in NAIA rebounds for two seasons, from 1984 to 1986 and made the NAIA All-American in all three seasons he was there. His overall average was 25.7 points and 15.7 rebounds, and at an invitational Tournament at Portsmouth he won the Most Valuable Player award, and was noticed by a scout for the Detroit Pistons.

Dennis Rodman was signed up for the Detroit Pistons in 1986, and remained there for the next seven years. His contribution to the team helped them comfortably enter the 1987 NBA Playoffs, but the Pistons were ultimately beaten by arch rivals the Boston Celtics, in a series of matches that was called by many one of the toughest battles in the sport of basketball ever. The pressure was not only physical, but the expectations on Dennis Rodman and his teammates was psychologically intense too, and his feuds with Dennis Johnson, the Celtics guard brought Rodman plenty of publicity, both good and bad. Dennis continued to improve his stats during the 1987-1988 season and the pistons made the 1988 NBA finals, but again they lost a tough battle against the Los Angeles Lakers while under huge pressure, and Dennis was once again in the thick of the action, this time matched against the legendary Magic Johnson.

Dennis was known mainly for his defensive hustling ability, and was usually a small forward for the pistons. He was noted during those early years for his versatility as he was able to guard forwards, centers or guards with equal skill. Dennis won the NBA Defensive player of the Year award twice, but from 1991 onwards Dennis stepped up to take the place of long-time Pistons defensive forward Rick Mahorn, and his reputation as one of the greatest rebounders ever was forged. In six of the next seven years he averaged over 15 rebounds per game playing as a power forward. In 1992 he achieved a career-best 34 rebound game and he kept his fearsome reputation after moving from the Pistons to the San Antonio Spurs in 1993, and then on to the Chicago Bills in 1995.

Although many considered Dennis, who was already 34 years old and considered somewhat volatile, to be a risky move for the Bulls, he adapted quickly to his new team. He suffered calf injury problems but still achieved 20 plus rebounds in over 11 games in his first season there. In 1996 he was credited with being instrumental in helping the Bulls achieve their NBA Playoff Finals victory over the Seattle SuperSonics. During the series of six games Dennis managed a rebound average of 13.7 per game and even Seattle coach George Karl admitted that Rodman had won two games virtually single-handed for his team, on the two occasions the SuperSonics had failed to control him.

The Legendary status of Dennis Rodman as one of the best defensive basketball players of all time cannot be denied, and his abilities brought him considerable earning power during the prime years of his career. His total contract earnings from his basketball career were in the region of $30 million, without taking into account the additional earnings he made from endorsements and various other business interests, including his ownership of a restaurant. But Dennis’ volatile temperament caused him to hit the headlines for all the wrong reasons on more than one occasion, and perhaps unfairly it’s those less positive occasions that many people remember him for.

Despite his earnings from basketball, and his numerous other highly publicised escapades, such as his reality-TV appearances, his stint with the World Championship Wrestling (WCW) organization, where he fought under the name Imposter Sting and locked horns with wrestling legends such as Randy Savage, Hulk Hogan, and even tussled in celebrity events against the likes of Butterbean and Dustin Diamond, Dennis Rodman today is technically broke. His assets have been eaten up by a series of unfortunate business decisions, sheer bad luck at times, and he currently has a debt of $1 million to his name, largely through child and spousal support that remains outstanding.

Dennis and his first wife, Annie Bakes, had a daughter named Alexis in 1988 at the beginning of his career. The couple divorced in the early 1990’s and Dennis married again in 1998, to model and TV personality Carmen Electra. Rodman’s second marriage was short-lived however, he and Carmen divorced in 1999 just six months after the wedding but in the same year he met Michelle Moyer, who was later to become his third wife. Dennis and Michelle had two children, a son in 2000 and a daughter the following year. The couple married in 2003 but once again marital bliss was short-lived for Dennis. By 2004 Michelle had filed for divorce and although the couple attempted to sort out their problems for many years, the divorce became final in 2012, and the press revealed that Dennis owed over $850,000 in unpaid alimony and child support payments.

Despite the financial problems that Dennis has encountered in recent years, his legendary status as one of Basketball’s greatest defensive players, combined with his unique and eccentric personality has enabled him to remain popular and well-known long past the end of his professional sporting career. He has appeared in numerous reality TV shows, including Celebrity Big Brother in the UK, Celebrity Mole, which he won taking the $220,000 first prize, and Celebrity Apprentice twice, in 2009 and 2013. He has worked on voice-overs for The Simpsons and appeared in the TV show ‘3rd Rock From The Sun’. He has also appeared in several films and briefly had his own MTV reality chat show, The Rodman World Tour. He has been the subject of at least five books focusing on his accomplishments in basketball and his unique perspective on life, but his financial situation remains less than ideal now in 2018, yet even so Dennis can at least trade on his remarkable personality and Worldwide popularity.

Dennis Rodman has in recent years hit headlines around the World for achieving the impossible, and forming what seems to be a genuinely warm relationship with North Korean leader Kim Jong Un. He first visited the rogue state in 2013 as part of a basketball exhibition, and he and his party were the first Americans confirmed to have met the turbulent leader. Dennis’ unique and eccentric personality appear to have made a strong positive impression on the North Korean leader, and Dennis visited Kim again later that year, when he encouraged President Barack Obama to reach out to Kim Jong Un diplomatically to end the tension between the US and North Korea. In 2014 he made controversial comments regarding imprisoned American Kenneth Bae, for which he was heavily criticised, but in 2016, after being released by the North Koreans, Kenneth Bae publicly thanked Dennis for speaking out on his imprisonment and credited Dennis with raising awareness of his case, Kenneth Bae also believed Dennis’ comments helped secure his early release. His visits to North Korea were the subject of a documentary released in 2015 entitled ‘Dennis Rodman’s Big Bang in Pyongyang’.

Dennis Rodman is a truly unique individual, his place among the greatest Basketball stars of all time is certain, but his eccentricity and sometimes bizarre antics have made him one of the most recognizable stars of the sport internationally. He is known as much for his colorful hair and colorful lifestyle as his outstanding athletic prowess, and his profile has only been heightened by the remarkable relationship he has with the leader of one of the most dangerous countries in the World today. Dennis has been listed in Slam Magazines Top 50 Players of All Time and he won the NBA Defensive Player of the Year on two occasions.

Dennis supported PETA by becoming the first male to model naked for their ‘Rather Go Naked Than Wear Fur’ campaign and raised considerably amounts for charities such as the ‘Make-A-Wish Foundation’ through his appearances on Celebrity Apprentice. He has been outspoken in expressing his desire that North Korea and the United States form a better relationship and despite his occasionally volatile nature and often controversial statements, he has managed to win fans around the World for being brutally honest about exactly what he thinks. It would be a fairly uninteresting World if everyone was the same, and without a doubt the incredibly unique Dennis Rodman is one of an incredible kind.