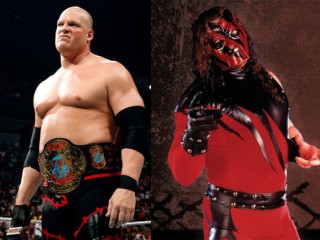 It’s well known that wrestling is mostly fake, but some personas of the wild world of professional wrestling are just as larger in person as they are on screen. A towering 7-foot wall of muscle with a massive personality to match, Glenn Thomas Jacobs aka Kane is one of professional wrestling’s most beloved stars. Jacobs has been wrestling with WWE since 1992. His character is promoted as an insane pyromaniac brother of The Undertaker, whom he often teams or feuds within the ring. With 19 awards under his belt, he is one of the most decorated wrestlers in WWE history. And in a recent twist worthy of pro wrestling: In May 2018, the wrestler won the Republican Primary election to become mayor of Knox County, Tennessee.

Kane is by far one of the most well known and accomplished of all WWE wrestlers. Kane has won the WWE Tag Team Championships 12 times. He has also won WWE’s Money in the Bank once and is a two time World Champion. His WWE performances have inspired millions of people, whose admiration have in turn fueled his ridiculously successful career.

How Did Kane Earn his Money and Wealth? 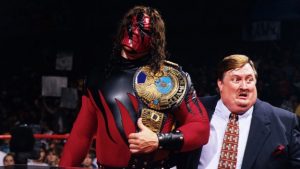 Kane was born on April 26, 1967, in Torrejon De Ardoz, Spain in a US Air Force Base. His real name is Glenn Thomas Jacobs. After a few years in Spain, his family moved from the base to St. Louis, Missouri.

For obvious reasons, Glenn Thomas Jacobs excelled in athletics. Before he was Kane, he was still huge – towering over his peers as soon as he could hold a bar or ball. He was particularly good at basketball and football, which he played in high school and college. After graduating from Bowling Green High School, he continued to play sports at Truman State University.

However, as he grew older, Jacobs found that he was not enjoying sports as much as he used to. Instead, he found himself entranced by the world of professional wrestling, which was more alive than ever in the 1990s. Transfixed, he threw everything aside to pursue his newfound dream.

Kane made his wrestling debut in 1992, as the dark and mysterious Angus King. This gimmick didn’t last long – the crowd had already seen plenty of wrestlers like him before. He quickly moved on to the persona of the Christmas Creature, which he maintained until losing to Jerry Lawler. After a brief stint as the right hook tooth excavator, wrestling Dentist Dr. Isaac Yankem, Kane grew tired of gimmicky characters. He then decided to adopt a more serious, less tacky character, Unabom, which he stuck with from 1995 to 1997.

The WWF saw great potential in Kane. However, many of their previous characters for him were poorly marketed and executed. After a brief period of meticulous planning, the WWF debuted him in his current form on October 5th, 1997. Donning a red and black mask that made his monstrous build even more intimidating, Kane immediately drew in spectators. Since he was presented as the Undertaker’s younger brother, his character also had legitimate backstory rather than being a gimmick.

At the outset, Kane began racking up wins and accolades. One of his most notable wins occurred at the 2000 Royal Rumble, where he eliminated 11 other competitors under being eliminated himself by Steve Austin. A year later, he teamed up with his stage-brother The Undertaker to become the “Brothers of Destruction”, going up against many numerous other tag team duos. After a glorious chokeslam against Triple H in 2003, he finally unmasked himself after winning his third Grand Slam Champion Crown.

Kane is the first professional wrestler to win the ECW, WWE, and World Heavyweight Championships. In total, he has won 19 championships. Despite his age, he continues to wrestle today – he most recently choke-slammed the great John Cena in “Raw” in March 2018.