Two entrepreneurs step into the Shark Tank with a product that they created from inspiration from their father. Meet Kathryn Saltsburg and Lauri Frasier. Their company is Hugo’s Amazing Tape and they are seeking $50,000 in exchange for 50% equity in their company. The product? Tape. But this tape is truly amazing and can solve all of your sticky situations. The tape has no adhesive so it sticks to nothing but itself. It is super duper strong, Kathryn says.

Lauri and Kathryn each pull the tape and pull the tape, demonstrating just how durable it is. And pull they do, as veins bulge out on each woman’s neck. They relax while the tape falls, crimped but not broken. And, Lauri continues, it will not come apart until the user takes it apart. Lauri tosses a few books with tape wrapped around them in the air and catches it, then unwinds the tape with ease. Stop the madness! Kevin exclaims.

There’s more madness, however – the tape does not leave any sticky residue. The tape is amazing and goes right back to its original form in the way that it was. Hugo’s Amazing Tape is extremely versatile with hundreds of uses. In fact, they’ll demonstrate some uses! You can use it to wrap up your potluck, ensuring that it won’t spill in the car. It can go in the freezer and the microwave. It also goes around embroidery threads.

In fact, Hugo’s Amazing Tape is wonderful around plants and great for binding wires and extension cords together. The two women call for Mark’s attention, raising a basketball with an air pump taped around it. Mark has a hearty laugh of that. In fact, you can even wrap Hugo’s Amazing Tape around wrapping paper! There are unlimited applications and the markets are wide open, and they’re an all-season item. They know the Sharks will use it, so do they want samples?

Lori admits that this was one of the most entertaining pitches they’ve ever had. Kathryn passes tape out to each of the Sharks, and they begin to play with it by wrapping it around their fingers and wrists. Lori then asks who created it and how, and Barbara asks who that man in the photo is. Hugo is their dad, and the two of them are sisters. Hugo created the tape and passed away earlier in the year. He invented the tape about 20 years ago and was a very creative guy. He stumbled across some tape that someone had used to tape a package that was sent to him. He had the tape rolled up and took the material to someone.

Kevin points out that the tape is just PVC, which is not a new technology. Hugo took that material to somebody and said that he wanted to make something similar, but he wanted it to be non-sticky. Robert asks if either of them own the patent, but Lauri reveals some grim news – the patent expired with her father’s death. Patents only last 20 to 23 years, Lori says. She asks where they are selling Hugo’s Amazing Tape, and Lauri says that they are only selling online for now.

They started by selling out of the trunk at a swap meet and trade shows or wherever they could, but they have some online sales. The Sharks all ask to see the product in its complete and final packaging, which is bland and uninspired, to say the least. They come in half-inch, one inch, and two-inch rolls. A meter of tape is bought for $1.27 and is sold for $12.99. The biggest year of sales was about $68,000, although the numbers are “unclear.”

They have, however, sold $500,000 in the past two years (since 2015). In the year-to-date (2017), they sold $27,500 worth of product. Robert asks why can’t he just call the people who make the tape and buy himself. Lauri says that she isn’t sure about all this, but Robert confirms it’s possible to call those people and do it himself. Mark asks where the product comes from, which is Taiwan. It’s definitely getting ripped off, he confirms. 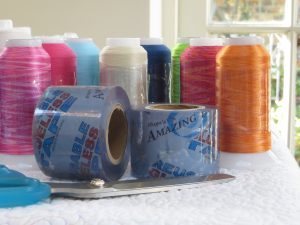 Barb asks if this is their full-time job and if they’re actors. Lauri is an actor and a parent coach, and Kathryn is a voice-over artist and hairdresser. She would be in her hair salon and sell her clients amazing tape. She answers the phone to take calls for Hugo’s Amazing Tape and process orders while excusing herself from her client. Kevin gets it and that it’s a very crazy chicken. However, he feels that it was the best bad theater he’s ever had on Shark Tank. It’s good bad theater, and it was fun.

Unfortunately, this really isn’t a business for an investor. Kevin is the first Shark out of the deal, and Kathryn asks if he’s sure about that. Lauri says that when her father passed, Hugo’s Amazing Tape was her father’s legacy and she wanted to uphold it and see it succeed. But they would love to get it out there, but it’s also an incredible product. Robert laughs and speaks his mind. They’re doing great with the memory of their dad, but he’s not sure where the business is. They lost him on the patent and distributing, and it’s a crazy story that it’s perfect for one of the Sharks presents. But, not him. Robert is out of the deal.

This is the type of thing that Barbara loves to get her hands into and work with. She starts by saying “Here’s what I like about it…” which Robert interrupts with a knowing “See!?”. Barbara likes that she took water and wet the exterior of her glass, thinking that if the tape gets wet it doesn’t work. However, the tape held. She took it off and there was no residue on the glass. But what she thinks they have here is a business that they need to get rid of. 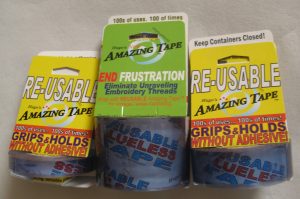 Honestly, it’s better for them to sell because it’s a business that neither of them really want to wrestle with. It’s just a complicated, complex market. Lori and Mark are the only ones left in the deal, and Lori says that the two of them have been talking. The business has a lot of potential, but also a lot of risks. Lori and Mark want to buy the entire company out for $100,000. This is a full exchange of $100,000 for the whole thing, and they’ll take care of Hugo’s legacy.

Kathryn and Lauri look at each other, shocked and unsure of what to say. Kathryn simply asks, “they’re not kidding, right?” They have to take a moment and think about it, but Mark shakes his head no in response. They were kidding after all! They accept the deal without much more hesitation, having sold off their business for a solid chunk of money.

Hugo’s Amazing Tape is still available in retail, and can be found right at your local Wal-Mart! Although Wal-Mart isn’t the only store to carry the tape, it’s easily the biggest achievement for a product to land in such a massive retailer. The tape can be ordered online through Wal-Mart or Amazon, and some other smaller companies carry the tape as well (typically, mom and pop hobby supply shops).

Hugo’s tape is available in 50-inch segments and comes with a width of half an inch, 2 and ⅜ of an inch, or 2 inches. However, there appears to be a shortage of product as the prize on Amazon is extremely high with only 12 products left. It’s unclear if this shortage is just a temporary problem, or if it’s indicative of Mark and Lori dropping the product after having made back their invested money.