ZUP Boards is the brainchild of Glenn Duff and his former business partner, Tim Zeckser, https://www.boatingmag.com/gear/zup-boardaccording to Boating Magazine. Tim did not appear on the Shark Tank episode. Glenn told two different origin stories of the “industry disrupting” wakeboarding boards. He first told the Sharks that he’d wanted to start the company as a way of bonding with his daughters. Later, he said that he discovered the need for a new kind of board on a church outing where the kids in his care were having a difficult time with the wakeboarding activity. Regardless, they made their first prototype out of wood and eventually built ZUP into a million dollar business. Would the Sharks decide to invest? Let’s take a look. 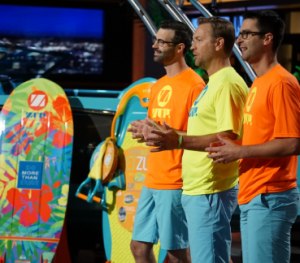 Two men in orange T-shirts raced out onto the stage, dragging a man in a yellow T-shirt behind them on a board. They enthusiastically greeted the Sharks and introduced themselves as Nick Kierpiec, Glenn Duff, and Scott Parks. Scott told the Sharks that they were looking for a $300,000 investment in exchange for 10% equity stake in their company. Glenn began their presentation by saying that everyone enjoyed the day out on the water, but some of the recreational activities such as surfing could be a little intimidating.

He claims that their board, ZUP, allowed the inexperienced to ride with confidence. They showed a video of young men wakeboarding behind a boat. Nick explains that their board was designed for comfort with 2-foot straps, two side handles, and a tow rope. This would allow the rider to start out at a prone position, graduate to a kneeboard position, and then eventually stand up. The video switched to an older man standing up on the board. Nick said that if Grandpa can do it then anyone can do it.

Glenn said that it was the easiest board that someone could tow behind a boat. He modeled laying on the board on stage. He claimed that it was stable, and people would be able to climb all over it as they adjusted positions. He modeled pulling the handle up and down to either sit or kneel on the board. Glenn also got weirdly emotional when telling the Sharks that there is no pinch point on the handle. He told them that he had four daughters and he was always can turn that they would pinch their fingers when they put the handle back. He then models laying belly up on the board, claiming that the entrepreneurs did it all the time.

Nick finished off the presentation by asking the Sharks if they had any questions. Lori rolled her eyes while Kevin asked what their sales were. Nick told them that they have done $2.5 million in sales in the last four years. Kevin wanted to know what they were doing this year, and Nick told him that they were about to exceed their original goal of $1 million. Lori wants to know where they were selling the boards. Nick told her that they had 180 retailers in the United States as well as stores and the UK, Canada, Australia, and Japan. Lori asked him if he sold online, and Nick said that they did both through their website and other online retailers.

Mark Cuban asked what their biggest direct consumer outlet would be, and Nick told him that it would be Amazon. Kevin wanted to know how much they sold it for. Nick explained that they had different levels of boards. Their highest price one was $400 while their best-selling board retails for $279. Lori asked how much it costs them to make each board, and Nick explained that their average margin across all of their products was 54%.

Sarah, who was the guest shark with the hit company SPANX, said that she couldn’t figure out what made ZUP boards different in comparison to the competition. Glenn told her that he understood her background as an industry disruptor, and thought that she could understand them being industry disruptor’s themselves. What made it seem like they done it on accident because they were ignorant of the fact that they could not do it. He told her that he had been a designer for 30 years.

Glenn got tearful as he told the story of how he got the idea for ZUP boards. He said that he had four daughters, and his wife had said that as they grew older they wouldn’t want to hang out with their parents so much more. He made the boards as a way to bond with his children even when they became teenagers. They ended up getting a boat.

Lori asked about their patents. Glenn told her that they had three utility patent that had already been granted. When Lori asked him to elaborate, he went on a strange tangent about how everyone on the boat was going to be happy. He said that their boards help build confidence because the riders wouldn’t have to be pulled up out of the water. He continued, saying that boat riders are awesome because they have the heart to teach somebody how to come out of the water.

All of the Sharks looked very confused at what he was explaining. Lori respectfully asked for clarification, stating that she didn’t know what his story had to do the patent. Sarah said that she was basically wondering the same thing. She asked the three men to explain what was unique on their board that only they had. Nick explains that the foot straps are patented because they’re used as elbow and knee pads as well. Sarah protested, stating that they were footpads on other boards. Glenn agreed but explained that it was the using them for different things that made ZUP boards unique.

Glenn explained that it was the specific combination of items on their board is what got them the patent. Lori understood. Glenn said that he thought that they had the perfect scenario for amateur water sports. Mark wanted to know why they hadn’t sold more if they had the perfect solution. All three of them looked a little dumbstruck at the question. Glenn reiterated that they were industry disruptive. Mark pointed out that they had done that four years ago.

Sarah interrupted them, stating that she wanted to help them because she liked them. She explains that when they were presenting to the Sharks, they should start with a problem that they were able to solve, tell how the other solutions on the market were inadequate and then explain how they solved the issue with the product. Sarah wanted to know what was wrong with the other solutions that were already out there.

Glenn started by saying that the Shark should be prepared because he got a little touchy-feely when he told the story. Mark was having none of it. He told him to give a direct answer to the question and instead of pontificating. Mark told him that he’d gotten the point across that he was passionate about his business and the boards, but he needs to focus. Glenn spoke up, stating that every Sunday they would bring a bunch of kids out to the water and they weren’t able to ride anything. They put something together, and then the kids were wanting to ride it all the time.

Mark was unimpressed. He asked them again why they hadn’t sold more boards. Glenn fell silent. Mark continued, stating that he had never heard an actual disruptor called themselves it. He explains that the market would call an entrepreneur disruptive once their sales proved it. Daymond nodded in approval of what Mark was saying. Nick tried to explain that other people have called the business disruptive, but Mark said that it was more of a distraction than an explanation of why the business was successful. He went out.

Daymond said that he couldn’t see them having a conversation. He also went out. Lori asked about the product itself, wanting to know if there was any competition. The man explained that there were knockoffs. Scott said that there is a large company who they believed violated their patents. They had lawyers retained at 100% contingency so that they could focus on the business. Kevin wanted to focus on the numbers, but Lori wanted to finish the patents. She asked if there is a decision made in the litigation. She finally got it out of them that the judgment was made against them.

Mark Cuban asked them if they didn’t think it was relevant. Scott said that he did, but they want to get the other stuff out first. Kevin cut and again, asking what they would make in profit from their million dollar sales projection. Scott told him that they were likely to make $200,000 in profit. Kevin asked if that was without paying themselves, and Scott admitted that it was. He asked them if they had any debt. Scott said that they had $550,000 in debt. Kevin seems shocked.

Scott attempted to explain that there is a windfall with inventory, and they have $100,000 in the bank. They also had $200,000 in receivables. Kevin said that they were 50-50 chance away from losing it all. If their sales ended up not going well, they would be out of business. He went out. Glenn said that they loved presenting to them, and thanked Kevin. Lori went out as well, stating that she didn’t feel it was a business that she could be all in for.

Sarah went out as well. She spent a little bit more time with them asking if anyone else had the no-pinch handle. When she was told no, she informed them that they should’ve led with that. Sarah told them that they should work on their marketing message because it would be their biggest asset. She didn’t think it was a hurdle that they could overcome. Since all the Sharks were out, Glenn, Nick, and Scott had to leave the stage. As they were leaving, Daymond told them to expect some orders from him. 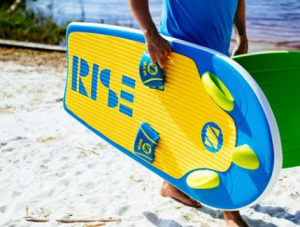 Even though they did not get a deal with the Sharks, it seems like ZUP is still going strong. They are still selling all of the boards that appeared on the Shark Tank episode. The business has also made branded tote bags, water bottles, and t-shirts, which are all available for sale on their Facebook page. Speaking of their Facebook page, they recently announced their intention to release a portable blow-up board called RISE. Check out their website later this summer if you’re interested in purchasing this more affordable board.