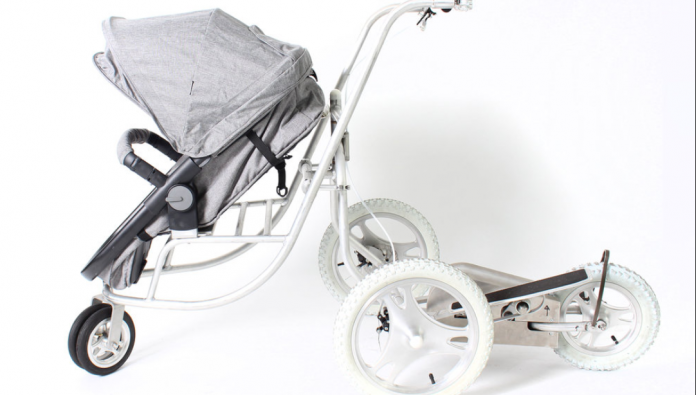 Before Pier Paulo Visconti brought his Elliptical Stroller idea to Shark Tank, he’d brought himself to the United States. Paulo moved from Italy to the United States in 2001 with just $400 in his pocket. He was about to secure an apartment, but no furniture. One night, he woke up to a cockroach crawling over his face as he slept and knew he had to do something to change his situation. He got involved in real estate and eventually became a landlord for three apartments that he owned. By the time he came up with the idea for Elliptical Stroller, he had enough money to fund a high-priced prototype and chase down seven patents. Would this be enough to impress the picky Sharks? Let’s take a look. 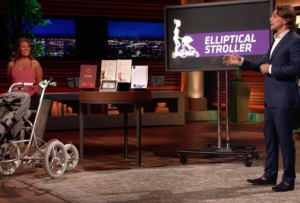 Pier Paulo Visconti walked out onto the stage and greeted the Sharks in the Tank. He introduced himself and requested $500,000 in exchange for 40% of his company, Elliptical Stroller. He started by telling the Sharks that a few years ago, he was speaking with his sister who just had a second child. She was getting frustrated with losing the baby weight. He said that she didn’t know how to exercise and stay with her kid at the same time. He said that he needed to come up with a solution.

Paulo asked the Sharks what would be better than to combine a stroller with the most used aerobic machine by women. That’s how he got the idea to invent the Elliptical Stroller, which was the first one in the world. At that, a woman came out riding the Elliptical Stroller. There was the conventional stroller in front with an elliptical placed within three wheels of varying sizes in the back. Mark Cuban said that it was only missing one thing. Robert agreed and asked Paulo where the baby was.

Paulo said that he was working on it. That got a laugh out of the Sharks. The woman rode the Elliptical Stroller around the stage. He claimed that this was the first time that people would be able to use the stroller as a fitness machine, apparently forgetting about jogging strollers. He told the sharks that it was made up of two components. The actual stroller itself, and the elliptical stepper mechanism. He said that the stepper actually folded in and out so that parents could use it as in conventional stroller or the exercise machine.

Kevin continued, referring to the patents that Apollo had displayed on a table on the stage. He asked if they were for the prototype. Paulo said that they were, and insisted that he had seven different patents. Kevin wanted to know how much of his own money he’d spent, and Paulo told him that he spent $170,000 of his own money. Mark asked how much of that was just the patents, and Paulo said that it was $72,000 worth.

Kevin asked Paulo if someone could just get on it and use it, or if they had to train for it. Lori pointed out that it was just the stepper. Paulo said that it depended on your fitness level. Robert and Kevin got up at the same time to try it out. Daymond told Kevin to get in the stroller. Robert was the first to try it. Lori asked Robert if it was easy, while Daymond observes that it looks like it was a reverse elliptical the way he was pedaling. As Robert moved across the stage, Paulo shouted to him that the break was on the right.

Robert honked the horn as he went down the hallway. Daymond told Paulo to close the door so he couldn’t get back in. Lori left at the honked and called it a clown car. Paulo urged Robert to stop, stating that he didn’t have any insurance. Robert said that it was cool if a little unstable. Mark Cuban told him to go as fast as he could and see how hard it was to stop. Paulo reminded him that it was only a prototype, and looks nervous.

As Robert got off, Kevin decided to try it. Lori asked him if it was just like a stepper, and Robert said that the motion was similar but it was a shorter step. Kevin got on and was having a little trouble getting it started. Paulo told him that he was not athletic. It seems like it wasn’t designed for Kevin’s weight. As he moved it jerkily across the stage, you could hear a metallic grinding sound. Lori asked if it was it was because it was a prototype, and Paulo agreed that it was.

Lori asked him if he’d sold any of the Elliptical Strollers yet. He said no, claiming that he was still in the prototype stage. Lori asked how much it would sell for, and Paulo told her that he had two models. In the background, Kevin was trying to lift the prototype. He said that it weighed a ton. Paulo looked worried and said that the stroller he was riding on was $48,000.

Kevin said that it had functionality, but he wanted to know how new mothers were going to get it in and out of the car. Paulo looks startled by the question and said that the front part didn’t weigh too much because it was all aluminum. Lori asked if the back part couldn’t be aluminum too, and Paulo said that it could once it got out of the prototype stage. Robert pointed out that Kevin’s question was how people were going to get in and out of the car if it was so heavy. It also looked bulky. Paulo’s answer to that was that it didn’t need to go in the car. Daymond pointed out that he often took the jogging stroller to the park to jog with his kids.

Paulo said that not all the jogging strollers were foldable, Daymond and Robert said that they were. Lori wanted to know what Paulo did before the Elliptical Stroller. Paulo said that he was a real estate broker who came into the country with $400 in his pocket. He said he was inspired to better himself when a cockroach crawled on him in his sleep one night. He told them that eventually, he was able to get to own three apartments, and into real estate. He worked on the elliptical stroller in his spare time.

Kevin said that was interesting that he was successful in real estate, and he took the money that he made to solve an issue. Paulo insisted that it was not him solving an issue but creating a brand. He thought that there was a need for it and women really wanted it. He said that he went to Southpoint Park in South Beach, and he was consistently stopped by women. Before he could ramble on too much, Mark Cuban stopped him.

Mark said that if he had priced his product at $50,000 for 10% with the option to grow, he might’ve invested. But the valuation as it stood was insane. Paulo admitted that the company was not worth $1.2 million at the moment but that’s what he needs to grow. The camera cut to Daymond rolling his eyes. Mark told him that Paulo didn’t need money for production until he had potential customers. Paulo said that he had people that sent him emails wanting to buy it, but he still needed to go to testing.

Lori asked him if he had done the safety testing needed to even have a child stroller. Paulo said that that was why he was on Shark Tank. His chances of getting a deal were diminishing as the Sharks typically like to see the steps taken before an entrepreneur appeared on the Tank. Kevin pointed out that he put so much of his energy into getting patents without getting any customers.

Kevin wanted to know why Paulo didn’t offer a licensing deal to bigger companies. Robert pointed out that that would be much less risky. Paulo said that that was easy to say, but he couldn’t just go to the company and pitch that. The Sharks were confused and wondered why. Kevin said that he had taken the hard role to establish market share in an established arena. He said that didn’t make sense to give Paulo $500,000 to start from scratch when there were established companies that were already very popular globally.

Kevin said that he didn’t want to have to reinvent the entire business. He thought that Paulo should license the idea for the elliptical stroller, Apollo didn’t seem to want to take the path. Paulo said that that wasn’t the case, but Kevin pointed out that he couldn’t even get into the business’s door. Kevin went out, as did Mark. Lori said that she also was not willing to risk $500,000 for this product. She went out as well.

Daymond said that Paulo made of common critical mistake. He wanted to know how he had enough money to invest $170,000 in the product without getting a single customer. Paulo said that he was a hustler. Daymond said that he made his biggest mistake when he finally got money. He thought that money could solve the problem, and spent $6 million trying to build a brand that failed. He thought that because Paulo had the money, that’s why he made mistakes. If he hadn’t had the money, he would’ve bootstrapped the business and gotten customers first. Daymond went out.

Robert was the only one left. He knew that Paulo was very excited about his project, but told him that he would have to stop designing and getting more patents. He said that Paulo would have to have the same level of love and passion for the product in terms of sales. He thought that there is no excuse for not having one sale because now that it was crowdfunding and Instagram, and different ways to get pre-sales. Paulo said that he didn’t just want the money, he also wanted someone like a shark to help him with the business. Mark said that he asked for the wrong amount. Robert said that for $500,000 he couldn’t get on board. He went out.

Elliptical Stroller Now in 2018 – The After Shark Tank Update 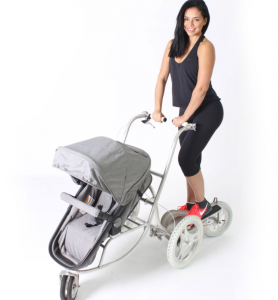 Since appearing on Shark Tank, the Facebook page for the elliptical stroller has been pretty quiet. There was a big update in April where Paulo announced that he would be traveling to visit a manufacturer in Europe to launch the next generation of Elliptical Strollers. These new models would be a lighter attachment to existing strollers instead of the heavier prototype Paulo brought with him on the Tank. It seems like he took the Shark’s advice to built up to a better product. Keep checking their website for updates for the actual release.