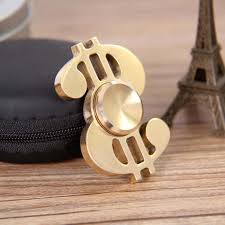 The fidget spinner is one of the most unexpected trends to sweep the nation. Invented in 1993, the toy saw a sudden resurgence in early 2017. Like previous trends such as Livestrong bracelets, silly bandz, and rainbow looms, the toy became particularly popular with elementary and middle school children (resulting in it being banned at 30% of schools). The unprecedented hype of early 2017 has now died down, but the toy remains a popular school and office stress relief accessory. You can easily find a fidget spinner for just a few dollars, but the most expensive fidget spinners can cost at least $200! The 10 most expensive fidget spinners take stress relief into a new dimension – maybe they’ll make you feel a little better about that hole in your wallet…. 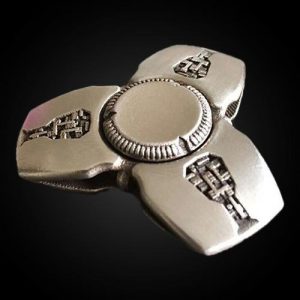 The Black Lotus Tri Spinner is the brainchild of industrial designer Ben Richardson in part with Australian Design Firm Yurich Design. The company releases a limited run of the spinner in 2017. The Black Lotus Spinner is somewhat difficult to find, but it can sometimes be found online.

The triple-pronged spinner has threaded and embossed features for a more industrial look. The central body of the spinner is one piece, which makes for a more stable spin. Each black lotus spinner is made from SS420 Stainless Steel infused with bronze. Customers can choose form a black or silver spinner with a matte or polished finish. 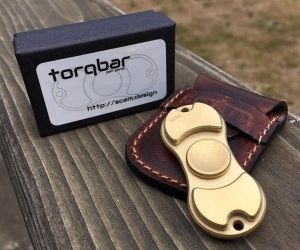 Each torqbar is made to order. Customers can choose from a wide range of metals. The most popular choices are tellurium copper, stainless steel, and titanium. The metal can be also be sandblasted or anodized. While the base configuration of the Torqbar averages around $150, certain combinations of materials can cost as much as $300! 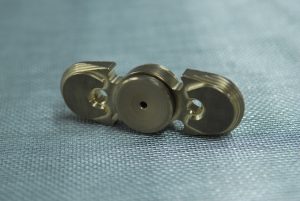 The Alpha EDC Pocket Top is CNC machined out of bronze and stainless steel. Its central bearing can be swapped out for other colors and materials. Thanks to the balance afforded by its precision machine, the spinner can revolve continuously for as much as three minutes. 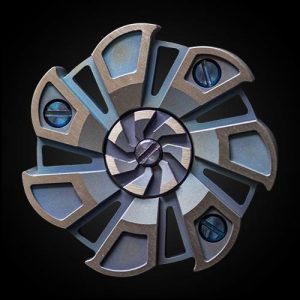 Titanium is a choice material for some of the most expensive fidget spinners. Custom machining outlet Metal Worn’s iteration of the spinner is actually on the affordable side of things, and their spinner is by the far the most unique.

As its name implies, the Turbine Spinner looks like a turbine. It is precision milled from grade 2 titanium and then sandblasted. The titanium body is also anodized for a multicolored, slightly worn look. The spinner’s central bearing is made from ceramic. 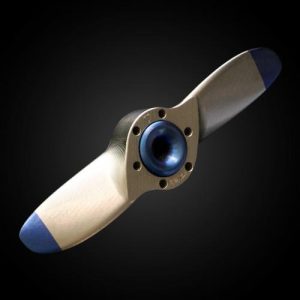 The TiSpin prop is an art piece created by Titan Rings designs. The TiSpin Sprop was initially released in a small run of just 10 pieces, but demand for the spinner prompted Titan Rings to start making the spinners to order. Being an art piece, it’s no surprise the TiSpin Prop is one of the most expensive fidget spinners money can buy – calling it “art” lets you get away with any price!

Resembling an airplane propeller, this particular spinner was designed to act as an effective office stress relief tool while showing off the unique qualities of titanium. The TiSpin Prop is constructed completely from titanium, with an anodized bearing and tips. Customers can also customer the colors of the spinner. 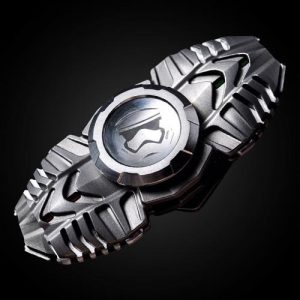 Star Wars Fans rejoice – there’s a fidget spinner just for fans of the force. The ETS One Stormtrooper spinner designed by StormEDC, a high-end EDC producer that creates themed merchandise. This nerdy spinner can keep the geekiest of office workers focused on the job.

The ETS ONE Stormtrooper spinner can be constructed from a choice of aluminum, titanium or cubic zirconium. The most expensive fidget spinners offered by StormEDC are of course made from anodized titanium. Each spinner looks like a spaceship and features an embossed stormtrooper mask on the bearing. 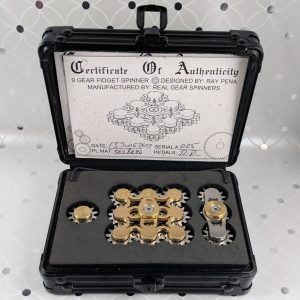 The 9 gear fidget spinner makes its buyers feel special – each spinner comes in a foam lined case with a certificate of authenticity. The spinner’s side plates are made for stainless steel, its buttons from brass and the gears themselves are steel. 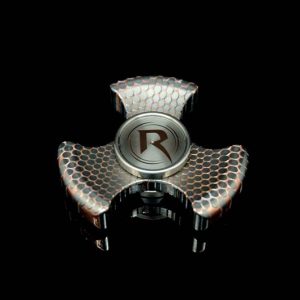 Handmade in the United Kingdom, the Rotablade Stubby’s design is one of the most copied fidget spinner designs. However, no low-end companies can rival Rotablade’s craftsmanship. The company offers a wide range of models. Their most accessible spinner is the Tri-Stubby, usually made from copper or brass. But like similar companies, their custom options can be several times more costly.

Rotablade’s most expensive fidget spinners can average around $500. Their flagship model is the Superconductor Tri-Stubby – a triple-pronged titanium spinner with etched honeycomb features. The spinner’s central bearing showcases Rotablade’s logo embossed with a laser. If that wasn’t classy enough for you, all of Rotablade’s spinners double as cigar stands! 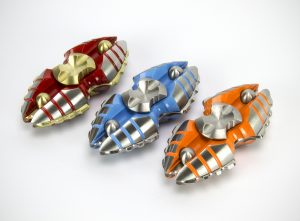 Unlike other spinners, the Artifact spinner creates a unique effect when spun. It also appears to have multiple prongs when spun as well. The Artifact is made from stainless steel and brass and is offered in red, orange, blue, and gold/steel colorways. 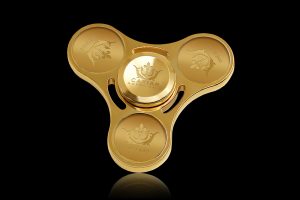 If you’re rich enough to afford anything from Russian jeweler Caviar’s catalog, choosing between a car and an accessory is probably normal for you. Caviar is a company with a reputation for being obscenely luxurious, and they don’t pull any punches with their custom spinner. Caviar is best known for their gold-plated iPhones, which sell for 250,000 rubles (around $4000 USD).

For the price of just one of Caviar’s spinners, you could buy several of their phones – or just get a car. Their fidget spinner is the by far one of the most expensive spinners in the world. Plated in 24k gold, the spinner features the Caviar logo on each of its prongs. It can also be customized with diamonds, the colors of the Russian flag, and carbon fiber.