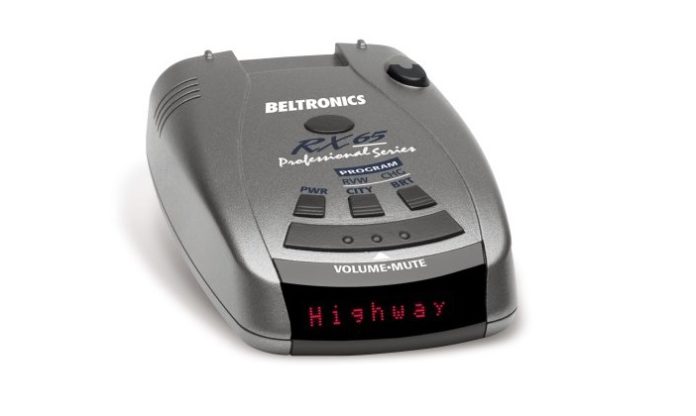 I began this series of radar detector reviews with a look at an Escort model, and I can’t help but feel like that was a mistake. They have features that few other models can match, and thus I feel like my objectivity has been compromised. Take the Beltronics RX65 for example. This is a great radar detector, the range is good and the list of frequencies it can pick up is perfect, but it lacks a few bells and whistles, bells and whistles I have grown fond of, and as a result I don’t think of highly of it as I probably should. It is a fine device, but the downsides come from external sources, from other firms doing more exciting things with the tech, and I feel like that makes a difference in terms of whether or not the detector is worth the purchase.

The reason for this is simple. The core tech behind radar detectors has not really changed in the last few decades. You are paying for the software, better filtering algorithms, more hardware integrations, and ease of use options. Those take time, and a substantial R&D budget, and it is in these areas that the budget models like the RX65 fall short. Thankfully all of those issues are mitigated significantly by the price, with the RX65 being a lot cheaper than the Escort Max2. Still, the issues cannot be swept under the rug entirely.

I do not mean to be overly critical. In this day and age most of us expect at least some phone integration from these kinds of products, and when it is missing the utility of the detector falls like a stone. All that said, I can see who this product is for, the kind of person who does not like their electronics integrated, the folks out there who want simple, and for them this is a damn fine machine.

Always start with the lest important part. The RX65 looks like an Atari Jaguar blended with a CD player fro 1996. The look of this build leaves so much to be desired, which is a shame. The display is bright and easy to read, but gives a real clock radio vibe. Of course, all that keeps the price low, which is a plus, but I would be happy to send an extra $50 per unit to get it looking on par with some of the more expensive models. The feel of the build is pretty good though, has a nice heft, which separates from similarly price models from other firms, who almost uniformly feel light and easy to break. This one feels like it can take a beating, overall I think it will last, which is doubly impressive.

How a build looks is barely important, but it can be something of a deciding factor in tie breaker scenarios. The edge here comes in the feel, the aforementioned heft, and I feel you should weigh, aha, that more heavily, double aha, in your decision. Having the mute button on the body of the build is something that plagues almost all radar detectors, except for the Escort series. It is not safe having to lean forward to mute it while you are driving, and thus limits the utility of the feature. In addition, I found the volume controls more cumbersome to use than I would like.

So, the features. There are none. Well, it can do the core set, detect the full gamut of radar bands, and even detect lasers, but beyond that there isn’t much to rave about. The lack of a real time GPS app is conspicuous, as it is with quite a few models in this price range. One feature that you don’t see too often at this price point is the radar detector detector protection. It is immune to VG-2 scans, making it a little safer to transport through states that ban it’s actual use.

There is a smart system that is supposed to protect against false positives, and filter out safe radar noise, but it could be a lot better. I found it going off near constantly in dense urban areas. You can rid yourself of a few of these by deactivating the X-band warnings, most folk have stopped using those models, and they were mostly phased out in the mid nineties. Be sure to verify what is being used in your area before doing so, some rural precincts still use the older X-band radars.

The LIDAR, laser detection, works, but I have found very little use in it. While more and more folk are getting hit with the laser gun, you will find the fact that it is a point to point system that the speed is checked before you are warned. Better to look for a separate laser jammer instead, they are legal in most areas, but radar jammers are not.

Overall this is a bare bones build, but with a feature or two beyond the core. It is always nice to see a little extra, and it makes it much easier to recommend this build to the entry level consumer. Owning and operating a radar detector takes work though, you need to know your area, and if you intend to travel longer distances with this particular model you are looking at a lot of extra work. Range wise you are looking at a little over a mile in good conditions. It should be enough.

I find it fun to discuss the legal issues sorrowing owning and operating a radar detector. It’s rare enough that I get to look into this stuff, and get paid for it. radar detectors are for the most part legal in the US, but if you are reading this abroad then i am sorry to say that for most of the rest of the world Radar detectors are against the law. The Communications Act of 1935 covers you if you are using not commercially in the US in all states besides Virginia and DC. They are also prohibited on US military bases, so be aware. Finally, Minnesota and California both have restrictions on what can and cannot be placed on a windshield, under their obstruction of view laws. Remember, radar jammers are illegal everywhere, but LIDAR jammers are not, and they are far more useful than laser detectors.

For an entry level product with little in the way of bonus features the RX65 is a bit on the expensive side. You can find these in the $150 price range, which is extremely cheap true, but there are models that can match this one for a third of that price. That said I would recommend checking here to see if there is a discount available. I do not known if VG-2 immunity is worth the added expense, but for the more careful user it might well be.

One interesting thing about the company Beltronics is their website. It lists no current models for sale. navigating the site will lead you to several empty pages, where we should find these things for sale. A bit of a concern to be honest, and it makes it very hard to recommend this build at all. It also means we do not have a warranty, at least from the manufacturer. The seller should offer you coverage of some type, but it is a bit of a risk. Buying through the likes of Amazon is your safest move in my opinion, you can at least then be guaranteed some protection.

Overall this is a bit of a concerning build. Not only is it more expensive than similar models, but the current state of Beltronics’ website is a cause for concern. If the issue is resolved soon then I might be able to see clear to recommending this model, but as it stand there are other options.

So here we are. A bit of a wild ride to be honest. In terms of use there is a lot to like here. It lacks a few features I like, but so too do most models other than the Escort builds, so I cannot place to large a black mark on it for that. No, it is the state of the site, and the apparent lack of warranty, coupled with a price on par with the Passport S55 that makes this nearly impossible to recommend. If you want a bare bones model to test out go for the sub $50 Cobra models, if you are in the market for a step up at this price range then the S55 is your best option. Above that there is a wider variety, depending on what you need it for. It leaves me here with having to advise you to look elsewhere.

That said if you want to take advantage of all the discounts available at Amazon.com you can click here.