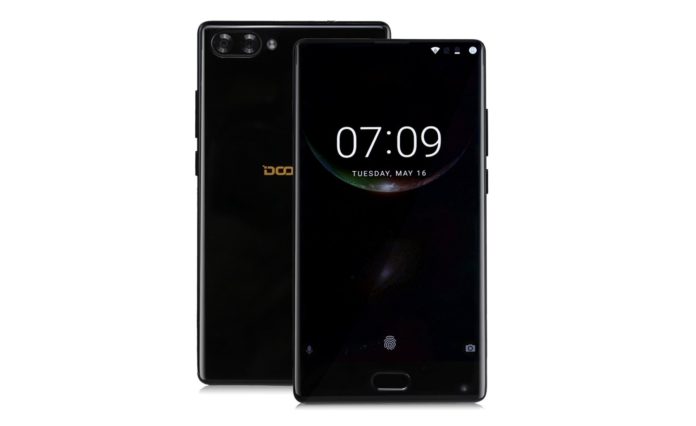 Well isn’t this one a pleasant surprise. Most of the stuff I get to review during my downtime are simple things, like backpacks or HDD cloners. This week I got me a phone to check out. The Doogee Mix, a riff on the older Mi Mix from Xiaomi. There is some interesting things going on in China when it comes to mobile tech. Designs get released, other people take them and start producing variants, the variants get variants, and we end up with a huge selection of similar products to choose from. The Doogee is aiming at the mid range handset market, though the internals and the camera are both fairly impressive. My only issue with the phone is the display, it lacks the crystal clear resolution that I crave.

Doogee are not new to the market, they have been releasing handsets since mid 2014, but this is the first one that I have ever seen. They got their start by designing custom phones for the Spanish market, their first big release was a phone for the Villareal CF soccer team, a minor success in that market. Since then they have focused on expanding, and as of right now have a variety of handsets in all price brackets. They are Android based, which isn’t much of a surprise. They also have a reasonable high turnaround for their models. The Mix is  being pushed as a comfortable and practical bezel-less build. The bezel is essentially that space between the pone’s screen and the edge of the phone. Xiaomi released their Mix a while back, and while I liked that one, it was a bit cumbersome. The Doogee Mix is a smaller phone, sitting at 5.5″, and looks gorgeous.

So let’s get to the review proper, see how this phone stacks up against the competition.

Bezel-less phones are nothing new, Samsung have been pushing that aesthetic for a long time now, but affordable bezel-less phones are. There are two main reasons why it’s taken the third parties so long to release these slimmed down low cost alternatives. Firms like Samsung have well funded R&D departments, they are able to not only design the tech, but also pay out of pocket for new tech to be developed. The second reason, and I can’t believe I didn’t think of this, is the software involved. When you hold a bezel-less phone you will notice that your hand is touching the screen. So the software needs to know the difference between simply holding the phone and touching the sides with intent to make it do something. With the third party production houses churning out the tech all that was left for Doogee to do was make the software, and voila, we have the Mix. 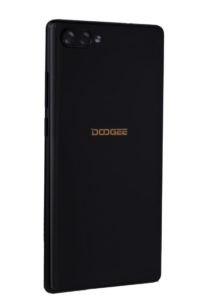 The Chinese smartphone market is fascinating. They have all the manufacturing over there, especially in this market. It means that local phone companies sprout up everywhere, and there are a shed load of them. They source everything locally, and it means we can get top or near top of the line hardware for peanuts. So long as you know where to go for the phone you can make out like a bandit, while waiting a few weeks on its arrival.

The Mix is a 5.5″ Android 7.0 Smartphone. It might not come with much in the way of propriety software, but being on Android means we get the app store. Chinese handsets tend to be fairly open, and for folks like me who like to tinker, this is a real boon. For the less than tech savvy, don’t let that dissuade you from purchasing, this is still and easy to use smartphone, and the app store will give you access to all the tools you need to make it fee like a true upgrade.

If we ignore the screen for a moment, the hardware is impressive. A there are eight CPU cores in here, on two separate CPUs. Each is four cores, with one having far lower power draw. The benefit to Octa-core models over quad core phones is in the battery life. When performing low end tasks the low power draw CPU will spool up, when performing intensive tasks, like playing games, the power hungry cores will activate. it means that day to day, this phone will last longer per charge. There are two slots for a nano sim, so if you need access to multiple networks, or your travel often, this phone has you covered.

In addition there are two versions, one with 4GB of ram and another with 6GB. I got to play around with the 6GB version, and I love it. The more RAM you have the more programs you can run at the same time, without slow down. I use a memory manager app on my own phone, but I feel like that would not be necessary here. The on board GPU is dual core, and is more than up to the task of playing the latest, and the oldest, games. I am really more of a retro player on the go, so I’m less interested in the app stores latest releases, and more interested in the kind of emulators I can get running. I was able to run old school Mario all the way up to Sunshine Mario. There is more than a enough power under the hood here to render out Gamecube games even if the frame rate is choppy at times, more an issue with Dolphin on Android than anything else.

The major downside here is the screen. I like that it uses Super AMOLEDs, crystal clear that, with excellent colors and blacks deep enough to rival a CRT, but the output resolution is 720 x 1280. A mistake from my perspective, most phones aim for 1080 x 1920, and my own phone is at 1440 x 2560, so the switch to the lower res was extra jarring for me. The pixel density is pretty good, at 267ppi, but I was still left disappointed.

The cameras are top notch. I’m not much of a picture taker, but I get that it is an important factor for most folk out there. There is no front facing camera, one of the downsides to being bezel-less, but the rear cameras can capture at 4608 x 3456 in picture mode, very nearly 16 megapixels though that measurement is a bit ridiculous. Video recording is full 4k at 30fps. Considering that there are no commercially available displays in 4608 x 3456 that res is a bit overkill, but it should sway a few out there.

The quality on offer here is higher than expected. In terms of feel there is some nice weight to the build. Not so heavy hat it grew uncomfortable, but not so light that I would forget about it. I like a bit of heft to my electronics, so this is a real selling point for me. About 7oz overall. The look of the build is amazing, when you get a bezel-less phone in your hand you tend to wonder why all that real estate at the sides of the phone is being wasted by other firms. An evolution in terms of handset aesthetics.

Overall there is a lot here to like. You have to know that when it comes to Android you get what you put into it. For fans of modding there are plenty of options here, and less doors to break down than is usual. The look is amazing, and the hardware impresses me at this price point. The battery is very long lasting, getting more than a day on a full charge with moderate use, and at full burn I got a little over four hours. Bear in mind, for me full burn really does mean maximum output.

No we get to the price. You can get the Mix at a variety of storefronts, but for once I have to advise you skip Amazon.com. The folk selling there are mainly drop shippers, and usually I like those kinds of stores. The difference this time is that as a phone a lot of them feel they can get away with a higher than is usual price. I would recommend going to the official website here and checking out all the current deals.

The warranty that comes with the Mix is a bit weird. The site is a bit ESL for my liking, but so far as I can make out the handset is covered for 1 year. This is limited coverage, so you can only claim if the product has a factory fault. I tend to use the argument that if a product breaks within a year of normal use then it has a manufacturer’s fault. You may have to press that issue here. They do not accept disliking the product as grounds for return, though they claim there is a five day return period handsets. Honestly, it’s a bit vague, and I feel like the company could improve its image a bit if they cleared a few of these issues up.I am not all that concerned though, in this market, the low cost smart phone market, there has been no warranty arms race, the companies selling are not vying to have the best warranty out there. This is pretty standard overall.

The price is amazing for what you get. A bezel-less phone with terrific internals in the sub $200 price point. So long as you know where to look for it you can make out like a bandit. The warranty could be clearer, and even if it were clearer it could also be better, but you get what you pay for. And what we are paying for is still great.

Overall, big fan. The form factor is wonderful, with a size between the big phablets and the daintier phones. The feature set is basic, but being Android means we can expand that to the ends of the earth. The hardware is impressive, at least the CPU and GPU set up is impressive, with a focus on battery life and functionality. The screen resolution is a bit of a let down, but I guess they have to make the saving somewhere. the warranty is lackluster, but price wise you can’t go wrong with this one.

An excellent product, with clear downsides such as not being able to use it in the United States, but at a price point low enough to compensate it’s a great buy. If you want something stylish, without breaking the bank, that is able to do it all, the Doogee Mix is well worth considering.