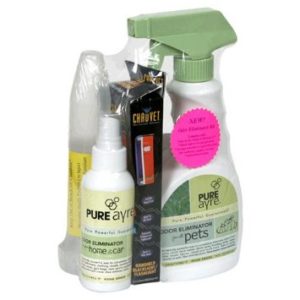 James Mitchell set off to make the world a bit little better by inventing a product that is completely nontoxic. He noticed one day that pretty much all of the readily available air fresheners that you see in grocery stores and supermarkets all contain harmful chemicals, some of which can do a good deal of damage to the environment. So, what he wanted to do was to make a new kind of air freshener that would get the job done, but do it in an all natural way.

That was when Pure Ayre was created. Of course it took a lot of trial and effort to find the right recipe to get the job done, but Mitchell was determined. His finished product takes away odors such as pet smells, urine, and smoke. It performs the same job as all other leading air fresheners, but the difference with Pure Ayre is that this product contains no alcohol, synthetic fragrances, and it does not add any pollution to the air. It is also safe to spray around food, people, and pets.

Mitchell knows that this is a product that needs to be made available to everyone immediately. Who wouldn’t want a completely safe and organic spray to make their homes smell a little fresher? The only issue is that he needs someone with a little more experience and a further reach in the marketing realm than he has. So he took Pure Ayre to the Shark Tank with nothing but the utmost confidence that at least one of the Sharks would want to sink their teeth into this business deal.

Mitchell enters the Shark Tank seeking a $150k investment in exchange for a 10% stake in his company. Then he begins to explain how Pure Ayre is the only safe and all natural odor eliminator on the market. Immediately after that, Mitchell asks the Shark Barbara Corcoran to come up and assist him for a moment. She obliges and watches as Mitchell sprays a piece of clothing with ammonia, which mimics the smell of urine. Corcoran smells it to acknowledge that it does indeed smell. Then, after that, he sprays the cloth with Pure Ayre and tells the Sharks that his product doesn’t just mask the smell, but breaks apart the particles that make the smell. He then allows Corcoran to smell the cloth again, which she says “smells wonderful”. Then, to drive home the message that this product is completely safe, he prays some of it in his mouth and tells the Sharks that it is also completely edible.

The Sharks seem to be pretty impressed with Pure Ayre, but when Daymond John asks if he has a patent for it, Mitchell tells them that he does not have a patent.  He says that he hasn’t gotten a patent because in order to do that, you have to disclose your entire formula and Mitchell doesn’t want to risk having another company changing just one of their ingredients to replicate what he has. 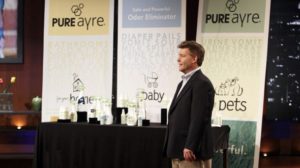 John doesn’t appear to be too impressed with this answer, but he moves on to inquire about the amount of revenue that Pure Ayre has made so far. To the shock of everyone in the Shark Tank, Pure Ayre has made around $3.2 million in sales and generates around $19k a month. However, Mitchell quickly backtracks to say that $3.2 million was their overall total sales. In the previous year they only made around half a million dollars, most of which was generated from the Walgreens locations that he supplies.

However, sales started to go down when a large competitor found out about Pure Ayre and pressured Walgreens into removing Mitchell’s product from their shelves. That caused the business to hire a consulting firm so that they could be given some advice and a little direction. The consulting firm estimated that it would cost about $4 million to get this product out into retail locations.

Another shocking piece of information that is revealed to the Sharks is that he only owns 57% of the company. The rest is dispersed through friends and family who also wanted a piece of the business. And in total, they all invested around $600k into it, but no longer have any money because they spent it all in small portions.

Robert Herjavec asks if he has any other competitors that aren’t food grade odor eliminators, but still completely natural. Mitchell beats around the bush a little, but finally admits that yes, there are other natural air fresheners out there but that the customers who have come to him said that those air fresheners were not satisfactory. Then Herjavec asks whether or not Pure Ayre’s former CEO approached anyone about licensing this to some other brand and again, Mitchell doesn’t directly answer the question right away. Kevin O’Leary gets frustrated and claims that Mitchell should have been the one to be fired, and not the former CEO.

Everyone is starting to feel a little heated now because Mitchell continues to avoid giving the Sharks direct answers to their questions. They feel like they’re having to pry answers out of him which doesn’t make him look all that professional. Corcoran interrupts the discussion going on between the men to make it absolutely clear that she will not be investing into Pure Ayre. This leaves him feeling shocked and speechless. So much so that he can’t even respond when Kevin Harrington also states that he will not be investing because he doesn’t see a real business opportunity.

Despite two Sharks already being out, John says that he is willing to put an offer on the table. He will give the $150k but only in trade for 50% of the company since he believes Mitchell is too ignorant to run it himself. O’Leary jumps in to make his offer immediately after that. He wants to buy the entire company for $150k, but he is also willing to give Mitchell a 7% royalty on everything sold.

Mitchell is dumbfounded by this offer because he doesn’t understand why someone would want to kick him completely out of the company. He believes he has “star power”, which Herjavec completely disagrees with. Herjavec says that he is a terrible salesman and the only way that he’d be willing to make a deal is if Mitchell would be willing to walk away from the company. However, he says that he came into the Shark Tank today wanting to make a team to help build up his business. Both Herjavec and O’Leary don’t want to make a team, they just want to make money.

Herjavec decides not to make an offer, but O’Leary’s still stands. Everyone just wants to have an answer already, but Mitchell walks away to call his wife first. While he is away, John and O’Leary decide to go in on O’Leary’s original deal together. They both want to buy him out of his company because neither of them want anything to do with him because it is their belief that he is bad for business. Unwilling to completely part ways from Pure Ayre, he decides not to accept the offer and walk away empty handed.

Pure Ayre Now In 2023 – What Happened After The Show

Mitchell has continued to grow the company despite not landing a deal on the show. He even had a booth at the Seattle Kennel Club Show in 2015.

Since then, a number of retailers have picked up the product including MudBay, McLendon, New Seasons Market, and QFC. Not only that, but it’s also available online through Amazon, Chewy, Pet Supplies, Only Natural Pet, and KVSupply. For a full list, you can check out their website here.

As of 2023. the company is still up and running. In fact, they’re making $5 million in sales every year. If anything, that proves that businesses can still succeed without an investment from the sharks.

For those who are interested, you can check out their official store here. They offer different packages for various prices or you can get the odor eliminator by itself. For instance, you can get a bottle of their pet odor eliminator for $12.99 or a double package for $24.99. They also offer a portable electric fogger that you can use to eliminate odors in hard-to-reach or large areas. Shipping depends on your location as well as the items ordered but they do offer a few different options including US Priority Mail, UPS Ground, UPS 3 Day Select. Every now and then, they also offer promos- you just have to keep checking their website.

And their products aren’t just available in the U.S. For one thing, they have a separate site for Canadian customers. Not only that, but their odor eliminator products are also available in China through Zhejiang Gomma Environmental Technology.

They also have an official Facebook page at @PureAyreOdorEliminator. Just recently, they posted about participating in Petpalooza- a day-long event at Game Farm Park- where they demonstrated the effectiveness of PureAyre.

What do customers have to say about their products? As far as we can tell, most people seem satisfied with how they work. For starters, they have a 4.6-star rating on Amazon across 312 reviews, which is quite impressive. While some people claimed that it didn’t work, the general consensus seems to be that it is effective for a variety of odors.