The Kombucha Shop After Shark Tank 2022 – Where Are They Now

The Kombucha Shop Before Shark Tank

$800 was all it took for Kate Field to begin her multimillion-dollar company, The Kombucha Shop, in 2013. She built it by herself from the ground up. That is the kind of initiative, business savvy, and entrepreneurial spirit that the Sharks usually love to see. Can they get past the taste and look of the product to invest in the businesswoman herself? Let’s take a look.

The Kombucha Shop on Shark Tank 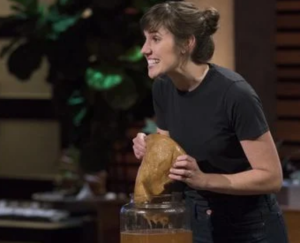 Kate Field walked out onto the stage and into the Shark Tank. She presented herself and said that she was from Massachusetts. She requested $350,000 in exchange for 10% equity in her company, The Kombucha Shop. The announcer said that the next business provided a way to make a trendy beverage at home.

Kate traveled back to a mystery container shrouded at the back of the stage. She smiled, stating that it would be the Sharks’ newest best friend. She uncovered the object and introduced them to the SCOBY. It looked like a preserved organ in a jar that you would see in a medical museum. Kate admitted that it was a little gross as she lifted it out of the jar with her bare hands. All of the Sharks looked disgusted.

The peppy entrepreneur said that it was the key ingredient to the fastest-growing beverage in the country. Barbara commented that it looks like a kidney. Sarah just said, “Ew!” Kevin stared ahead into the middle distance and looked disgusted as Kate explained kombucha to the Sharks, who watched with unmitigated horror. She called it a fizzy tea that was fermented and filled with probiotics.

Kate claimed that it had a delicious taste that customers could not get enough of. There was an issue, though. She said there was a barrier to entry for kombucha because most health food stores charge between 3 to 5 dollars for a single bottle. Kate gestured to the SCOBY and said that brewing the tea at home could be an intimidating task. That’s how she got the idea to start her business. 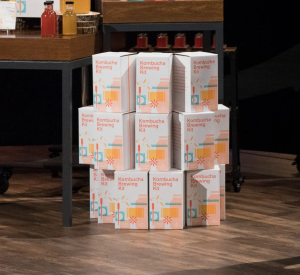 She unveiled the rest of her presentation table, full of boxes with cute packaging and graphics. Kate said that she could make this healthy and delicious drink more accessible for people. The product ensured that anyone who wanted to brew their fermented tea or ‘buch could at a fraction of the store-bought cost. The Sharks got a giggle out of the nickname for the beverage.

Kate said that customers could even make their ideal custom flavors, and it would only cost about $.25 per bottle of beverage. Next, she ended her presentation by asking the Sharks who wanted to help her bring this affordable kit to people’s homes.

Lori asked for samples, while Barbara pleaded not to have to drink that today. Kate grinned and said that she indeed brought representatives of the product. She began handing them out. She said that she thought the Sharks would be surprised by how much they liked it. Each took a sip, and it looked like no one was impressed by the taste. Mark Cuban grimaced, and Kevin smelled it, claiming that he went blind before taking a sip. Barbara said that she was growing hair on her chest. Kate lamented that she should never have let them taste it.

Kevin wants to know why she or her customers would like to go through this abuse, referring to the taste and process of the kombucha. Sarah insisted that once you started to get into it, it was an addicting experience. Yes, Kevin still wants to know how she planned on marketing “this stuff” to new people.

Kate let him know that they didn’t need any health claims. Mark Cuban cheered her for that, but Lori wanted to know why. She called Kate the most healthy person she had ever seen. Lori said that the fermentation process made probiotics, which was objectively beneficial. Kate said that it wasn’t her job to do so, and she didn’t need to anyway. The customers who would come to her already love kombucha and know the health benefits. 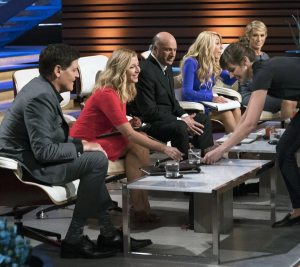 Barbara said that it felt good in her stomach. Kate agreed, saying that many people said it helps with their digestion. Kevin said that he felt it burning a bit, but it wasn’t in the wrong way. He continued, stating that his unsettled stomach was coming from the $3.5 million valuations. Kate explained that their lifetime sales were $2.2 million. They were on track to do 1.6 or $1.7 million in 2018.

Lori said that was great and asked where they were selling. Kate explained that they were primarily an online presence and sold from their website. Mark wanted to know if they had done any fundraising through Kickstarter or Indiegogo, but she denied having done that. Kate said that she started the company with $800 and built it up.

Next, she described the process of making it. She said you would need to brew some sweet tea, add some of the Scoby to the bottom, and let it ferment. There were instructions in the box that directed you to put the cotton cover on top, check the pH, and put a temperature gauge there. This made a once grueling process more accessible to the average person.

Kate said that she needed the money to get into retail spaces. She learned everything about the online market, and she crushed it. She was paying herself $500,000 per year. The Sharks were baffled as to why she wanted the money. She was making plenty without selling portions of The Kombucha Shop. Kate said she didn’t know what she didn’t know and could use some advice.

Kate was on Shark Tank to obtain a strategic partner to help her scale the business and retail space. She had taken the company as far as she could on her own. She has been a one-woman show the whole time. She felt like she had learned everything that she could. The market was unavailable to her at the moment. Kevin wanted to know what her dream retailer would be, and Kate answered instantly. Whole Foods. Although the packaging was large and bulky, she saw it displayed similarly to how she had it on the stage.

Barbera wanted to hear about the cost of the goods and how much Kate sold it for. The kid cost $11 to make, and they sold it retail for $55. They also had a deluxe kit which cost $22 to make, and they sold it for $75. Kevin let her know that the margins were barely good enough to sell in the retail space, considering they don’t pay you for 60 days. And she looked unhappy about that. Kevin reassured her by letting her know that the business that she already had was doing fantastic. She had already made $1.7 million for that year. Kevin wanted to know how much of that would be left after paying herself. Kate let him know that it would be $500,000. Taxes would be taken out, which means she would be left with around $300,000. That was a decent number.

He wanted to know why she would screw that up. Kate let him know that he had never put a dollar into advertising. All of the sales that she got were from people who already liked kombucha. She had zero acquisition cost. Kevin didn’t stay happy for long. He let her know that the business was not proprietary, and she would have to consider that—Mark Cuban ground at Kevin’s negativity.

Kevin wanted to give her $350,000 in exchange for 20% equity in her company. Kate didn’t just roll her eyes; she moved her entire head. Kevin said bidding began. Lori started it off. It is well known that she likes to be excited about the things that she invests in, and she was not a kombucha fan. Lori went out. Kate looked disappointed. Sero said she needed to understand what value she was added before she invested. Kate let her know that she needed someone to make the call to Whole Foods for her since she had been unable to get in touch with them to get into the store. Sarah let her know she wasn’t comfortable with taking equity to make a phone call. 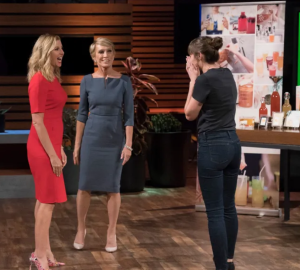 Kate insisted that she didn’t see retail as a huge distraction but instead as an addition to her already booming business. Kate said she wanted to blitz, and competitors were coming for her on Amazon. She was waiting for Whole Foods to call her back, and they won’t. It might be another two years before she could get into Whole Foods, and at that point, people would have taken over the space. Sarah said that she would not purchase 10% of The Kombucha Shop to make a phone call to Whole Foods.

She sounded like she was about to go out, but Barbara interrupted her. She and Barbara ended up joining forces. Mark had not gone yet. Kevin said he didn’t want to be part of their deal because they would overpay. Barbara continued, saying that Kate was a dream entrepreneur because she was the perfect face of the company. She had gorgeous glowing skin and was also capable of adorable designs. She said that Kate was the healthiest looking person that Barbara had seen in her life. The other sharks agree.

Barbara and Sarah went up on stage to hug Kate, while Mark Cuban loved disappointed. Barbara said that she could look as good as Kate did. She would swallow this horrible stuff every day for the rest of her life. Mark tried to butt in, but Kate immediately took them up on her offer. She said she would’ve done a deal with Mark later to the camera, but he felt slighted. He sounded like he was taking it a bit personally. The other Sharks reassured him as the screen faded to black.

The Kombucha Shop Now in 2022 – The After Shark Tank Update 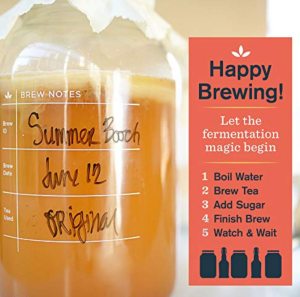 According to the entrepreneur’s LinkedIn, Kate left The Kombucha Shop in June 2020 to pursue new things. Her pet was named the second most memorable of the season by Inc. magazine. After the episode aired, they made a ton of sales, and they were “buried under orders for a month after the airing “according to the Wisconsin state journal, The Kombucha Shops kid is the top-selling in the world.

Even after being sold, the business is still alive and thriving. The website sells different flavor syrups, botanicals, and two different kinds of kits. They offer wholesale capabilities on their website as well. The company was acquired in 2020 by digital marketing guru Habib Bakshi. His brand so far has been focused on luxury, so it will be interesting to see where this new direction will take The Kombucha Shop.