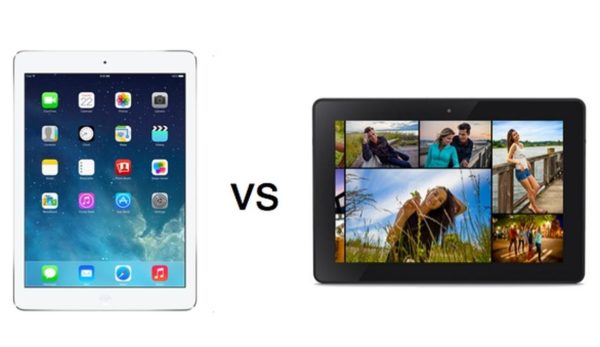 The iPad and Kindle Fire HD tablets have become some of the most popular devices for people of all age groups since their introduction several years ago. However, many people who have yet to get a tablet always find themselves a little lost on what they should go with, as both companies have great reputations and dedicated fan bases. Here, we’ll take a look at each device and give you the knowledge needed to make the best tablet decision for your current situation. For this review, we will be looking at the Kindle Fire HDX and the iPad Pro 9.7 inch. First, let’s take a look at both device specs.

With the specs out of the way, let’s set these two contenders in some head to head categories, and see how they stack up for the consumer.

Both the iPad and the Kindle carry large, crystal clear screens that do make viewing anything remarkably easy, but the Kindle seemed to have a slight edge in streaming capabilities when using Netflix as well as Amazon Prime Video which is incidentally not available for iPad. What was quite surprising is that when moving around my place of residence to test stream stability, the Kindle also proved superior, maintaining HD signal even in areas where the iPad momentarily lost connection.

With music however, the iPad won out. Though the Kindle does have dolby speakers which come through beautifully even on full blast, when headphones are used (for reference, in this trial V-MODA Crossfade M-100 headphones were used and to make for a one word review of them: amazing) there was no noticeable difference. The iPad in this case had the benefit of simply having more music options available, with iTunes alongside the Spotify, Pandora and Bandcamp apps that the Kindle also provided, and with an only slightly inferior external audio quality, this gave the iPad an edge.

It should be noted, that while Apple made the iPod and iPad line originally for music, Amazon similarly created the Kindle line as e-readers. To say the HDX has kept up the tradition would be an understatement, as it boasts the clean, classic controls you’d expect from Kindle, and a library only rivaled by the combined title registry of Alexandria and the Library of Congress. This pot is further sweetened in that many classics, educational texts or historically important documents are typically free within the Kindle store and Prime users can rent out books for free on a monthly basis. The iPad’s reading app in contrast, hasn’t quite kept up though it is easy to use and perfectly good in its own right.

If you are looking for a tablet mainly to watch shows, listen to music or read books, it is unlikely that you will need to an expensive or top of the line CPU or GPU to get what you want done. If this is the case, the Kindle HDX is the clear choice.

Perhaps the best argument for owning a tablet is that you can take it and use it in places that would not be ideal for your everyday laptop. For both the Kindle HDX and the iPad, the benefit of a large and bright screen is a trade-off in the sense that both are somewhat unwieldy if you are traveling without a carrying case of some sort. That being said if you are the type to travel with a messenger bag, you will find both are both compact and slim enough to be a barely noticeable addition to the load, even with protective cases. In terms of “in the field” use, both are fantastic as they can be used in nearly any light condition without issue. The Kindle HDX is of particular value here, in that during traveling or outdoor work, it has a wonderfully long battery life and can be recharged with any typical micro-usb charger which is a common find. The iPad also has a great battery life (though it can overheat in outdoor conditions on particularly bright days), but if a charge is needed, the proprietary charging cord can be a hard find or a slightly more expensive replacement.

This section is not so much a critique and comparison of the tablets as it is of their respective marketplaces, the Apple App Store and Kindle Store. In this contest, there is a very clear winner. While heavily curated and full of high quality apps, the limited android market that the is Kindle Store simply doesn’t provide the diverse functionality allowed to the iPad by the App Store. Outside of the aforementioned entertainment sections, the App Store has at least several times more downloadable programs than the Kindle Store. To tip the scales even more in favor of Apple, while both stores do often carry the same popular apps, some of them require “Kindle Edition” formats to function which has in the past caused delays in rolling out those apps pervasive that everyone is aware of. All things considered though, if you happen to be an individual who doesn’t care for the newest apps available the Kindle Store still does carry more apps than what the average consumer could use in a lifetime.

If we are to take the prices at face value, the Kindle HDX coming in at $100 less than the iPad (and with some searching, up to $175 if on sale) is the obvious choice. In truth, if one is to use the tablet they purchase as primarily an entertainment platform to use on long rides or airport layovers, it remains the best option of the two. However, if you plan to try to use your tablet for frequent communication, intensive apps, and even creation of content, then the iPad quickly begins to gain value. With a significantly more powerful CPU pairing, the iPad Pro can be paired with a compatible keyboard to essentially be the tablet that replaces your laptop for a great number of scenarios, making it ideal for business dealings alongside what are typically seen as normal tablet functions. Furthermore, with up to a quarter of a terabyte local storage available, when compared to the HDX’s 64 Gigabyte maximum, the iPad has the potential to carry just about any data you would need to have on hand, with or without a connection.

In conclusion, if this would be your first step into tablets and already have a decent laptop, the Kindle may be your best value. If however, you find yourself relying on a tablet more often than not and need that extra bit of performance, the slightly larger investment into an iPad Pro may be the best option.

In the battle between the iPad Pro and the Kindle HDX, it would appear the judge matters more than the device. Both are within their own right, fantastic devices that are suited for slightly different populations. For those who want to watch Game Of Thrones while waiting for the red eye flight to New York, but doesn’t necessarily need to work on a last minute presentation at 30,000 feet, the Kindle is a great choice. Similarly, if you (or the person you are buying it for) happens to be a college student, the auxillary services Amazon provides, which include a textbook rental program that can save around 80% on most titles alongside quick, effective customer support only strengthens the case for purchasing this device. If however you need to have mobile video meetings, or work on the previously mentioned presentation (though let’s be honest, you’re probably on that last level of Candy Crush) the iPad may be more your speed. With either the iPad or the Kindle HDX tablet, you are sure to not be disappointed whether you are new to tablets, or an already established power user.