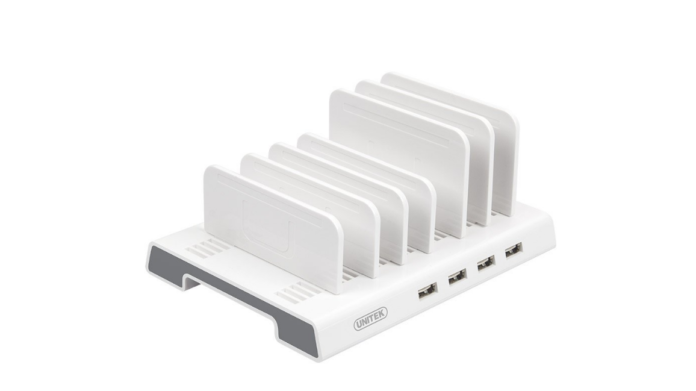 If you’ve ever owned a USB-enabled device, then it’s likely that you’ve struggled to keep it charged. Whether you have an Android smartphone, an Android tablet, an iPhone, an iPod, an iPad, or something else, it’s something whose battery you need to manage. If you own multiple of these devices, then I’m sure that you’re familiar with the feeling of having a tangled spaghetti-like ball of different chargers. A charger is made up of two components. There’s the piece that you plug into the wall, and then there’s the piece that you connect to the device that needs charging. Sometimes the wall piece is universal, but a lot of the times it isn’t. That means that if you want to bring the equipment to charge four devices at the same time (which is a possible scenario if you’re going on a field trip or something) then you’re going to be carrying around a lot of stuff.

Luckily, technology exists that is meant to make charging multiple devices at once a whole lot easier. Unitek has created a USB Charging Station Dock, which is a device that is specifically designed to facilitate the charging of multiple smart devices. You simply plug all of your devices into the dock, slot them into their individual stands, and let the charger do the rest of the work. It’s a really simple premise, and it’s even easier to use. 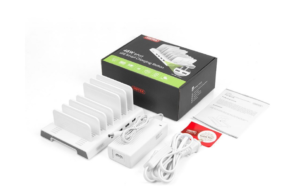 Price: Click here to view the current price at Amazon.com

As far as charging stations go, this device is pretty standard. It has a powerful output that enables it to charge up to four iPads at once, which as you can probably imagine, is an intensive process. An iPad usually has a much greater battery capacity than something like an iPhone, which means that a greater amount of energy is needed to charge one of them. That also means that a lot of energy is needed to charge four of them at once. Luckily, the Unitek USB Charging Station Dock is fully up to the task. It’s also fully compatible with charging a wide variety of devices. It would take me way too long to list all of them, so here’s just a taste. Unitek’s charging station can charge the iPad Pro, the Samsung Galaxy S7, the Amazon Kindle Fire, the PSP, the ASUS ZenFone, the Google Nexus 6 6P 5X, the iPad Air, the iPhone 4, the Samsung Galaxy Tab, and a lot more. This thing is built for versatility. 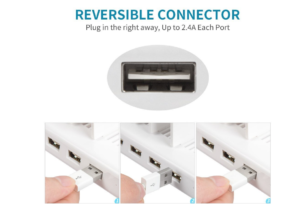 Speaking of versatility, one of the cooler parts about this device is the fact that its USB connectors are reversible. What exactly does that mean? I think that just about anyone who has ever done anything with a USB connector is familiar with how difficult it can be to plug a USB device in properly. You’ll turn it over again and again and it still won’t properly connect. It’s sort of a superficial issue, but it still exists. This charging station dock features reversible connectors, which means that no matter how you tackle it, you’ll plug your device in the right way. In my mind, this isn’t just a feature that improves convenience. It’s also a feature that improves the overall durability of the whole product. Since the connectors are so forgiving, so to speak, I personally would be much less hesitant to hand something like this over to a group of younger kids. It’s a really user-friendly feature.

If you’re interested in buying this product, then I’m sure you’re wondering whether or not it actually works. Although something like this can make a lot of promises, that doesn’t mean that it fulfills those promises. How fast does this device charge things? How hot does the device get when it’s charging? How durable is it? As it turns out, Unitek’s USB Charging Station Dock works really well in practice, too. To begin with, the whole product comes to you disassembled when you purchase it. (It’s a more awkward shape, so I’m sure you can imagine how hard it would be to ship it in its assembled form.) However, the assembly process isn’t as difficult as you may think. You don’t have to worry about pulling your hair out to get it working. Once the device itself is actually assembled, it’s just as easy to work. 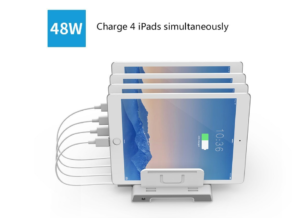 As I already mentioned, the reversible USB ports make this device a whole lot easier to use. If you’re looking for a charging station dock that can be taken on a family road trip, then this is the one for you. The reversible ports make it super easy to use, and it’s designed in a surprisingly sturdy way. This doesn’t feel like something that you could easily break, on purpose or on accident. The charging station is made out of a sturdier version of standard PC+ABS material, which is already pretty sturdy to begin with. Plus, as far as safety goes, nothing about this ever really feels cheap or dangerous. Whether you’re afraid of overheating, overcurrent, or overcharging, protection exists. So basically, I think that the Unitek USB Charging Station Dock has everything that you could really ask for coming from a device like this.

Is the Unitek USB Charging Station Dock worth it?

I think I’ve made it known how I feel about this product. It’s well-made and it fulfills a good purpose. However, is it actually worth what you’re paying for? To begin with, let’s consider that this device is priced pretty reasonably to begin with. It’s priced about as much as similar products that have these same specifications. It’s a pretty good value. The only thing that’s really different is that, with a lot of products like this, they typically include a couple of charging cables along with the dock itself. This dock just comes with a charging station, a couple of different organizing slats, a power supply, and a user manual. You don’t receive any charging cables along with it. However, considering how inexpensive charging cables usually are, I don’t see that as something that can be seen as a deal breaker. 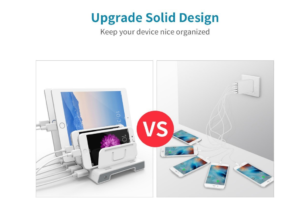 This device is something that can’t really be replaced by anything else. The only thing that I think is even remotely comparable is a power strip, but if you have a power strip, then you still have to have two components to each of your charging cables. I mentioned before that each charger has a bit that goes into a wall and then a bit that goes into your device. With this dock, you’re basically cutting out the wall piece entirely. That cuts out a lot of clutter. The dock’s dividers also keep everything much more organized than they would be normally. So if you have a need for something like this in your life, I think that it’s a no-brainer. This is something that you need, because there isn’t really a better solution out there right now. Not only that, but Unitek’s particular version of this product is one of the better ones out there. Consider this review to be a glowing recommendation.